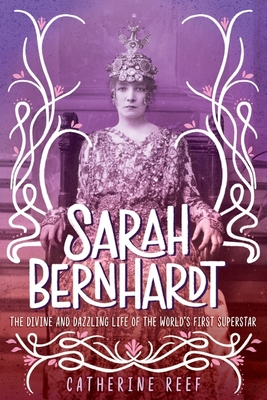 The Divine and Dazzling Life of the World's First Superstar

A tantalizing biography for teens on Sarah Bernhardt, the first international celebrity and one of the greatest actors of all time, who lived a highly unconventional, utterly fascinating life. Illustrated with more than sixty-five photos of Bernhardt on stage, in film, and in real life.

Sarah Bernhardt was a French stage actor who became a global superstar in the late nineteenth century—the Lady Gaga of her day—and is still considered to be one of the greatest performers of all time. This fast-paced account of her life, filled with provocative detail, brilliantly follows the transformation of a girl of humble origins, born to a courtesan, into a fabulously talented, wealthy, and beloved icon. Not only was her acting trajectory remarkable, but her personal life was filled with jaw-dropping exploits, and she was extravagantly eccentric, living with a series of exotic animals and sleeping in a coffin. She grew to be deeply admired around the world, despite her unabashed and public promiscuity at a time when convention was king; she slept with each of her leading men and proudly raised a son without a husband. A fascinating and fast-paced deep dive into the world of the divine Sarah. Illustrated with more than sixty-five photos of Bernhardt on stage, in film, and in real life.


Praise For Sarah Bernhardt: The Divine and Dazzling Life of the World's First Superstar…

★ "A captivating biography possessing as much verve as its inimitable subject." —Kirkus, STARRED review   "Reef provides insight into the legend in an account that smartly takes both Bernhardt’s theatrical art and her self-publicizing seriously....Reef does a particularly fine job of conveying the nineteenth century worlds in which Bernhardt moved and blossomed; she’s also tactful but clear in her acknowledgment of Bernhardt’s being a highly unreliable reporter of her own life....Overall it’s an intriguing introduction to an early global celebrity, and many readers will want to read more, lured in by the Divine Sarah a century on."  —Bulletin of the Center for Children’s Books   "The easy-to-read text paints a striking picture of 19th and early 20th century Paris....A strong addition to any biography collection." —School Library Journal   "In this concise, well-researched biography, Reef faithfully separates the documented from the speculative in tracing Bernhardt’s life....this is a solid introduction to an unconventional feminist and international idol." —Publishers Weekly   —

Catherine Reef is the author of more than 40 nonfiction books, including many highly acclaimed biographies for young people. She lives in College Park, Maryland. www.catherinereef.com.