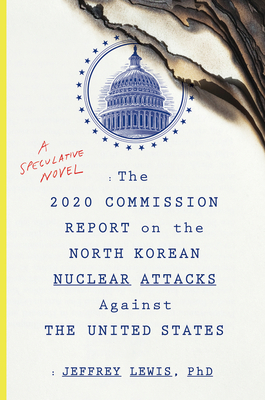 The 2020 Commission Report On The North Korean Nuclear Attacks Against The U.s.

“I couldn’t put the book down, reading most of it in the course of one increasingly intense evening. If fear of nuclear war is going to keep you up at night, at least it can be a page-turner.”

America lost 1.4 million citizens in the North Korean attacks of March 2020. This is the final, authorized report of the government commission charged with investigating the calamity.

“The skies over the Korean Peninsula on March 21, 2020, were clear and blue.” So begins this sobering report on the findings of the Commission on the Nuclear Attacks against the United States, established by law by Congress and President Donald J. Trump to investigate the horrific events of the next three days. An independent, bipartisan panel led by nuclear expert Jeffrey Lewis, the commission was charged with finding and reporting the relevant facts, investigating how the nuclear war began, and determining whether our government was adequately prepared for combating a nuclear adversary and safeguarding U.S. citizens. Did President Trump and his advisers understand North Korean views about nuclear weapons? Did they appreciate the dangers of provoking the country’s ruler with social media posts and military exercises? Did the tragic milestones of that fateful month—North Korea's accidental shoot-down of Air Busan flight 411, the retaliatory strike by South Korea, and the tweet that triggered vastly more carnage—inevitably lead to war? Or did America’s leaders have the opportunity to avert the greatest calamity in the history of our nation?

Answering these questions will not bring back the lives lost in March 2020. It will not rebuild New York, Washington, or the other cities reduced to rubble. But at the very least, it might prevent a tragedy of this magnitude from occurring again. It is this hope, more than any other, that inspired The 2020 Commission Report.

Praise For The 2020 Commission Report On The North Korean Nuclear Attacks Against The U.s.: A Speculative Novel…

"...Lewis’s book is very effective and deeply affecting. And as a warning of how close we are to unimaginable catastrophe, it’s  downright chilling." —The Weekly Standard   "I have only read a few more convincing accounts of how events can spiral out of control than what you can and should read in The 2020 Commission Report."  —War on the Rocks   "The tone – set midway between bureaucratic sterility and a Tom Clancy thriller – works very well...I couldn’t put the book down, reading most of it in the course of one increasingly intense  evening. If fear of nuclear war is going to keep you up at night, at least it can be a page-turner."—New Scientist   "Disturbingly plausible...with painstaking detail and bleak humor."—Slate   “Astonishing . . . Lewis deftly intertwines real-world reports with a fictional narrative that extends some of the president’s worst flaws to logical conclusions.”—The Daily Beast   "Terrifyingly plausible . . . A horrific imagined future based on a quite plausible extrapolation of the present . . . In its efforts to tug at the sleeve of a blithe nation, Lewis’s book follows in the post-apocalyptic footsteps of Nevil Shute’s On the Beach or the 1983 film The Day After. In its black comedy, which surfaces in the deadpan prose of the report, it is a Dr Strangelove for our time. Trump is as flamboyantly grotesque a character as any cooked up by Stanley Kubrick and Peter Sellers."—The Guardian   “Terrifying . . . the warning we need right now . . . [The 2020 Commission Report] aims to do what The Day After did, and spur us to action . . . It shows us an entirely plausible path from today's tense geopolitics to atomic annihilation and beyond, to what comes after nuclear fire.”—VICE Motherboard   “Lewis’s cautionary tale is a reminder of the grave risks at stake if diplomatic talks with Pyongyang fail, and the dangerous consequences that could follow if Washington returns to military brinkmanship and threatening rhetoric in a renewed attempt to pressure North Korea to unilaterally disarm.”—Voice of America   “A book with a ferocious pace and more black humor than one could imagine.”—Evening Standard (London)   “Jeffrey Lewis has taken one of our most serious security crises and imagined how it could erupt into a catastrophic nuclear war. The result is a book that is entertaining—it grips the reader with its dramatic story—but also educational: it informs the reader what an unprecedented catastrophe even a ‘small’ nuclear war would be, and how easy it would be for us to blunder into one. This lesson must be learned by more of us if we are to take the actions that could lower the probability of such a catastrophe.”—William J. Perry, former US Secretary of Defense   “The plot of this novel is so absurd and implausible—a nuclear war prompted by a presidential tweet—that it feels devastatingly true. The 2020 Commission Report is a brilliantly conceived page-turner. Let’s hope it isn’t prophetic.”—Eric Schlosser, author of Fast Food Nation and Command and Control —

Jeffrey Lewis, PhD is a columnist for Foreign Policy, a scholar at the Middlebury Institute of International Studies at Monterey, and a research affiliate at the Stanford University Center for Security and International Cooperation. He previously worked for the Department of Defense. Also a former director of the Nuclear Strategy and Nonproliferation Initiative at the New America Foundation and former executive director of the Managing the Atom Project at the Belfer Center at the Harvard Kennedy School, he is currently the publisher of ArmsControlWonk.com, the leading blog on disarmament, arms control, and nonproliferation. In addition to hosting the Arms Control Wonk podcast, he was profiled on This American Life, and has written for TheNew York Times, The Atlantic, The Daily Beast, The Washington Post, and elsewhere.