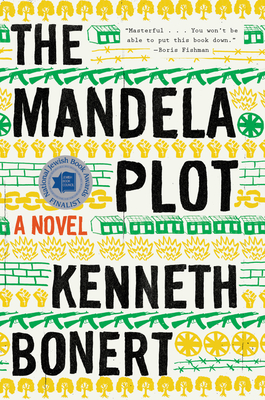 A Finalist for the National Jewish Book Award—Fiction

For fans of The Kite Runner and A Brief History of Seven Killings, a page-turning literary and political thriller set in apartheid Johannesburg

As the 1980s draw to a close, South Africa is a maelstrom of political violence, the apartheid regime in its death throes. Young Martin Helger is a misfit at an elite private boys’ school in Johannesburg, with a father who is a scrap dealer and a brother who is a mysterious legend.

When a beautiful and manipulative American activist arrives at the family home, Martin soon finds himself wrenched out of his isolated bubble and thrust into the heart of the struggle. At the same time, secrets from the past begin to emerge, tearing at the Helgers, a second-generation Jewish family, even as the larger forces of history and politics tear apart the country.

The Mandela Plot is at once a high-stakes literary thriller and a moving coming-of-age tale that charts the journey of a young man trying to find his place in a country that has lost its way.

Praise For The Mandela Plot…

"This is fiction that illuminates shifting allegiances and power struggles during a dark time and place in recent history. A riveting thriller with a solid historical base." — Booklist, starred review

"The Mandela Plot is as suspenseful as a thriller, and the truest kind of Jewish family story—suffused with love and secrets both. It'salso a masterful, terrifying portrait of a nation, at once bewitching and brutal, whose years on the edge have so much to teach America, and the world, today. You won't be able to put this book down." — Boris Fishman, author of A Replacement Life and Don’t Let My Baby Do Rodeo

“Propulsive, bare-boned, and riveting, The Mandela Plot shows how competing loyalties to family, truth, and history can tear a person—and a country—apart. Kenneth Bonert’s unvarnished characters are fierce and surprising—there are no seat belts on this ride.” — Rachel Kadish, author of The Weight of Ink

"It’s the late 1980s in South Africa, where an awkward boy named Martin struggles to find a place at an elite private school in Johannesburg. A beautiful American activist comes to live with Martin at his family home, and she makes him see his own chaotic, changing country through a new lens." — New York Post

KENNETH BONERT’s first novel, The Lion Seeker, won the National Jewish Book Award, the Edward Lewis Wallant Award, and the Canadian Jewish Book Award. Bonert was also a finalist for the Sami Rohr Prize and the Governor General’s Literary Award. He was born in South Africa and now lives in Toronto, Ontario.