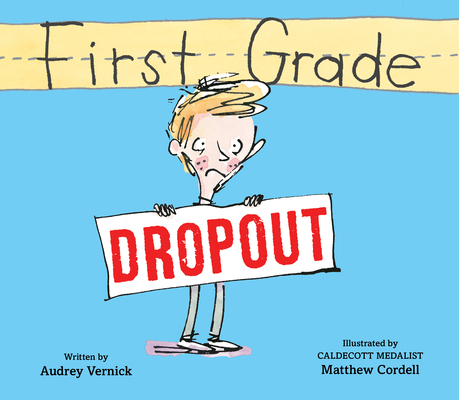 The first grade narrator of this book has been lots of things: Hungry. Four years old. Crazy bored. Soaking wet. Pretty regular kid . . . until he makes a mistake so big that he’s sure he will never be able to go back to Lakeview Elementary School. All readers, even those not in first grade, will find the narrator’s feelings familiar, and discover that even though embarrassing things happen, they’re usually not as bad as they seem. And sometimes they’re even funny!

“In Audrey Vernick’s hilarious picture book … a young boy decides that he can never bring himself back to school, not after committing an awful verbal blunder in front of his entire class. … in Matthew Cordell’s energetic, endearing cartoon illustrations we see the kid practically exploding at the memory of his mortification. Oh, the grinning faces! Oh, the hilarity!”
—The Wall Street Journal
"There is so much story depth and character development in this charmer about friendship, forgiveness, and flexibility that it reads like an excerpt from a chapter book … a just right book for sensitive grade-schoolers who like a good joke and are just learning how to laugh at themselves."
—Boston Globe
* "Vernick’s tousled-haired hero may feel miserable, but he has the self-awareness, timing, and raconteurship of a master monologist; readers will be won over from his intriguing opening line (“I’ve been lots of things”) and quickly assured that this, too, shall pass."
—Publishers Weekly, starred review

"With cartoonish, frenetic lines and messy blobs of color, the childish feel of Cordell's illustrations make Vernick's message clear: school life and friendship can be confusing...Many readers will recognize themselves in these pages."
—Booklist

"This winning picture book will be popular for its entertainment value, as well as for its potential to introduce ideas about empathy."
—School Library Journal

"The amusingly brassy and exaggerated text is clever, deploying hyperbole to make a genuinely humiliating situation into something kids can chuckle at with sympathy."
—Bulletin

Matthew Cordell has illustrated many picture and chapter books for children including Wolf in the Snow, which won the Caldecott Medal. He lives with his wife and their two children outside of Chicago, Illinois. Visit him online at matthewcordell.com and on Twitter @cordellmatthew.