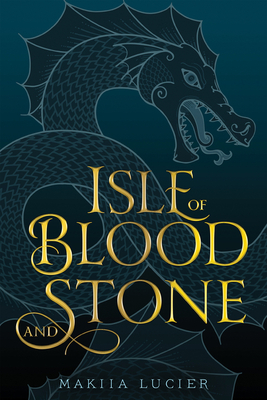 Isle Of Blood And Stone (Tower of Winds)

Hailed as "intriguing, compelling, and boldly enriching" (Buzzfeed), this sweeping fantasy full of intrigue and schemes, romance and friendship, and fearless explorers searching for the truth is perfect for fans of Tamora Pierce and Rachel Hartman. Now in paperback!

Eighteen years ago two princes of the island kingdom of St. John del Mar were kidnapped and murdered, a deadly plot by the rival kingdom of Mondrago. Everyone knows the story, but for Elias, Mercedes, and Ulises, the aftermath of that tragic day is deeply personal. Elias grew up without his father, who was killed trying to protect the princes. Mercedes is half-Mondragan, leaving her to grow up in the shadow of del Mar’s hate. And Ulises, as the youngest and only remaining prince, inherited the throne meant for his older brothers. Now, the three friends just want to move on with their lives. But when two maps surface—each with the same hidden riddle—troubling questions arise. What really happened to the young princes? And why do the maps look like they were drawn by Elias’s father, whose body was never found? To discover what really happened that fateful day, Elias, Mercedes, and Ulises must follow the clues hidden in the maps, uncovering long-held secrets and unimaginable betrayals along the way. But the truth is dangerous, and not everyone wants it to come out. Isle of Blood and Stone is a sweeping fantasy full of intrigue and schemes, romance and friendship, and fearless explorers searching for the truth.


Praise For Isle Of Blood And Stone (Tower of Winds)…

"Intriguing, compelling, and boldly enriching, Lucier crafts a vivid fantasy that will appeal to readers who love getting lost in new worlds." --Buzzfeed  “An exhilarating tale of fantasy, political intrigue, fearless explorers, and heart-thumping romance.” --Bustle  "Combining rich descriptions with a compelling mystery, Lucier (A Death-Struck Year) creates a vibrant world populated by appealing characters and enhances the story with subtle magical elements, a hint of romance, and a dose of political intrigue."--Publishers Weekly, STARRED review   "Readers craving a captivating adventure will find that and more in Lucier’s brilliant fantasy."--Booklist, STARRED review   "Lucier has crafted an exciting plot of attempted murder and betrayal that simmers just below the surface, right up to the breathtaking twist in the final pages...Highly recommended where Tamora Pierce, V.E. Schwab, and Rachel Hartman are popular."--School Library Journal   "Deftly employing suspense and mystery, bolstered by tantalizing details about strange beasts and geographical fascinations, this original fantasy drops hints with masterful precision, tracing clues left in the maps to a startling conclusion."--Horn Book Magazine   "A romantic maritime epic and a charming tribute to mapmakers, calligraphers, and explorers."--Kirkus   "This is the perfect fantasy novel for those who appreciate a dramatic mystery with a bit of romance. "--Bulletin for the Center of Children's Books   "An absorbing mystery."--VOYA