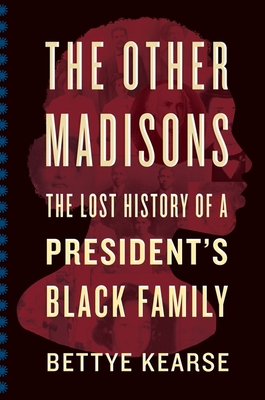 "A Roots for a new generation, rich in storytelling and steeped in history."

"A compelling saga that gives a voice to those that history tried to erase...Poignant and eye-opening, this is a must-read."

Winner of the 2021 Library of Virginia's People's Choice Award —Nonfiction

One of Kirkus Reviews' Best Books of the Year

One of Smithsonian Magazine's "Best History Books of 2020"

One of Good Morning America's "7 Books to Read for Presidents Day," by Alexis Coe

One of Parade's Best Memoirs to Read this Year

In The Other Madisons, Bettye Kearse—a descendant of an enslaved cook and, according to oral tradition, President James Madison—shares her family story and explores the issues of legacy, race, and the powerful consequences of telling the whole truth.

For thousands of years, West African griots (men) and griottes (women) have recited the stories of their people. Without this tradition Bettye Kearse would not have known that she is a descendant of President James Madison and his slave, and half-sister, Coreen. In 1990, Bettye became the eighth-generation griotte for her family. Their credo—“Always remember—you’re a Madison. You come from African slaves and a president”—was intended to be a source of pride, but for her, it echoed with abuses of slavery, including rape and incest.

Confronting those abuses, Bettye embarked on a journey of discovery—of her ancestors, the nation, and herself. She learned that wherever African slaves walked, recorded history silenced their voices and buried their footsteps: beside a slave-holding fortress in Ghana; below a federal building in New York City; and under a brick walkway at James Madison’s Virginia plantation. When Bettye tried to confirm the information her ancestors had passed down, she encountered obstacles at every turn.

Part personal quest, part testimony, part historical correction, The Other Madisons is the saga of an extraordinary American family told by a griotte in search of the whole story.


Praise For The Other Madisons: The Lost History of a President's Black Family…

"A Roots for a new generation, rich in storytelling and steeped in history."  — Kirkus Reviews (starred review)

"Astonishing... In extraordinary times, as statues fall, Bettye Kearse has written an extraordinary book. It contains lessons for all Americans... Powerful...Seeking to validate and enlarge the black Madisons’ saga, to tell a nuanced story until now completely unknown, [Kearse] succeeds richly...Leaving her much-celebrated white ancestors in the background, she restores the black Madisons to history. They are resilient Americans, second to none."  — Michael Henry Adams, The Guardian

"'You come from African slaves and a president,' Bettye Kearse's mother told her. According to oral history, she was the great-great-great-granddaughter of James Madison and Coreen, an enslaved woman; they were half-siblings. Armed with her family's archives, Kearse visited Montpelier, where Madison lived in a mansion and Coreen was likely born and raised in nearby slave quarters, and travels across the world and back again, through the Jim Crow South up to present-day California, in search of eight generations of Black Madisons. We think." — Alexis Coe, for Good Morning America, "7 Books to Read for Presidents Day"

"A compelling saga that gives a voice to those that history tried to erase...Poignant and eye-opening, this is a must-read."  — Booklist (starred review)

"A richly detailed, nuanced, and poignant story—part memoir and part social history—that places the dual legacy of slavery and sexual violence at the center of America's founding."  — The Progressive

"A compelling saga... Kearse, a very worthy storyteller carries the reader along as she deliberately and forcefully expounds on a narrative, abundant in its details — even though basically oral... In a way, Kearse’s quest to fill out portions of her story resembles the quest of two generations ago by author Alex Haley in his journey to find Roots: A Saga of an American Family... In all, Kearse spent 'more than 20 years traveling, researching and writing' about her ancestors. Get this book and relive her journey.”  — Daily Press

“The Other Madisons marks the culmination of Kearse’s 30-year investigation into not only her own family history, but that of other enslaved and free African Americans whose voices have been silenced over the centuries."  — Smithsonian

"A beautiful, sometimes wrenching, meditation on the brutality at the center of American history and the gnarled, complex power dynamics it has spawned in every facet of American life, from the halls of power to individual households." — Nina Renata Aron, California Magazine

"Kearse's enlightening book, The Other Madisons, has not only been a labor of love for the author for 30 years but, more deeply, her life's purpose...Kearse's experiences with racism and those of her ancestors are deftly and sympathetically braided throughout the pages. Most notable is Mandy, who eloquently speaks to the reader through the author's imagination. Kearse came to understand that her ancestors must have possessed incredible inner strength and hope."  — Albuquerque Journal

"The Other Madisons, as a thorough history of one family, may offer answers for other descendants of enslaved people as well. It is part personal quest, as Kearse works to understand and reconcile her own origins, and a carefully researched and documented correction to the American historical record."  — Shelf Awareness

"Though Kearse’s attempts to establish a genetic link to the president — who had no 'acknowledged offspring' — are met with 'roadblocks,' she succeeds in portraying her family’s tenacious rise in social standing across eight generations. This moving account asks essential questions about how American history gets told."  — New York State Writers Institute (University at Albany, State University of New York)

BETTYE KEARSE is a writer and retired pediatrician. Her writing has appeared in the New York Times Magazine, the Boston Herald, TIME Magazine, River Teeth, Zora, and the anthology Black Lives Have Always Mattered, among other places. The Other Madisons received the International Afro-American Historical and Genealogical Book Award for Nonfiction, Autobiography. Her research for The Other Madisons was covered in the Washington Post. She lives in New Mexico.
Loading...
or
Not Currently Available for Direct Purchase