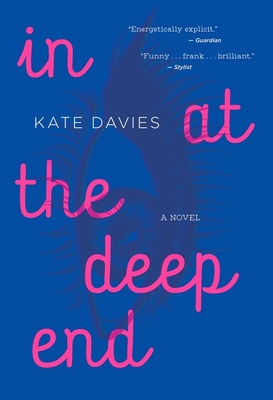 In At The Deep End

A deliciously disarming debut novel about a twenty-something Londoner who discovers that she may have been looking for love — and pleasure — in all the wrong places (i.e. from men).

So when Julia gets invited to a warehouse party in a part of town where trendy people who have lots of sex go on a Friday night, she readily accepts. And that night she meets someone: a figurative artist, who also happens to be a woman.

In at the Deep End is an unforgettable and audacious odyssey through the pitfalls and seductions we encounter on the treacherous path to love and self.

Praise For In At The Deep End…

*A Finalist for the Bollinger Everyman Wodehouse Prize for Comic Fiction*  *One of iBooks' 2019 Most Anticipated Books*   *A Publishers Marketplace Buzz Book*  *One of Autostraddle's Best Queer Books of 2019*    "Everyone must read this book. It's absolutely hilarious and devastating. I've never read something so brilliant."  —Ruby Rose    “[A] raucous and raunchy comedy of (bad) manners.”  —O, the Oprah Magazine, "30 of the Best LGBTQ Books That'll Change the Literary Landscape in 2019"    "Without a doubt, In at the Deep End by Kate Davies, is the afterparty book for anyone looking to extend their 'Fleabag' fun...Davies' book is raucous, sexy, poignant and smart, and is definitely the most fun you will have with lesbian BDSM short of doing it yourself."  —Hadley Freeman, Guardian (UK)    "This laugh out loud funny British tale follows Julia as she discovers she’s been looking for love and pleasure from the wrong place: men. As she explores her new lesbian life, Julia starts dating Sam. What starts out as liberating soon turns dark."  —Autostraddle, "55 of the Best Queer Books of 2019"    "The beauty of this novel is not the copious amounts of beautiful queer intimacy, though that’s also a validating and important part of it. Rather, the beauty of this novel is how adeptly Davies captures the surreal experience of coming out and being out of one’s depth—and she manages to do it with humility and a good deal of humor, to boot...We need stories like these in the world. We need raw stories of how challenging and fun and beautiful and complicated and obsessive this love can be. We need visibility for abuse within queer relationships. And we need levity, for God’s sake, we do. Thank goodness this novel exists. We can expect great things from Kate Davies."  —Lambda Literary Review    “Not since Lady Gaga’s Bad Romance has a piece of art so perfectly captured the exhilarating rush and sweet self-sabotage of a toxic relationship and the cruel truth that sometimes love and obsession are hard to tell apart. Rah rah ah-ah-ah!”  —Camille Perri, author of The Assistants and When Katie Met Cassidy    "I read In at the Deep End in a laughing (sometimes cringing) flash and then handed it to my wife who did the same. And then we talked and talked about it. (And then we made out.)"  —Emily M. Danforth, author of The Miseducation of Cameron Post    "A sapphic sexual odyssey...In this energetically explicit new take on the coming-of-age lesbian novel, Julia is a 26-year-old civil servant who wants a more exciting sex life...You can feel the influences here – Fleabag and Girls – but weirdly enough the strongest voice is Bridget Jones."  —Guardian (UK)    “This is a book about sex — and lots of it. Julia breaks a long dry spell with an awakening at a party; she doesn't like men and never has. She dives head-first into her new lesbian identity and has lots of adventures. The sweet, clever novel places a woman's sexual coming-of-age on a pedestal.”  —Refinery29, “35 Outstanding LGBTQ+ Books Of 2019”    "In equal parts side-splittingly hilarious and brutally honest, In at the Deep Endis the story of a twenty-something young woman making her first foray into queer —

KATE DAVIES was born and brought up in north-west London. She studied English at Oxford University before becoming a writer and editor of children’s books. She also writes comedy scripts, and had a short-lived career as a burlesque dancer that ended when she was booed off stage at a Conservative club, dressed as a bingo ball. Kate lives in east London with her wife. In at the Deep End is her debut novel.
Loading...
or
Not Currently Available for Direct Purchase