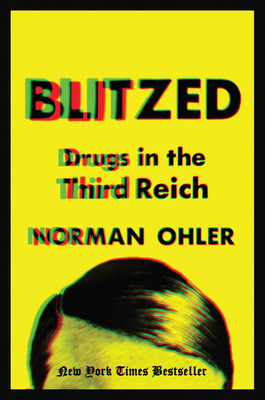 The Nazi regime preached an ideology of physical, mental, and moral purity. But as Norman Ohler reveals in this gripping new history, the Third Reich was saturated with drugs. On the eve of World War II, Germany was a pharmaceutical powerhouse, and companies such as Merck and Bayer cooked up cocaine, opiates, and, most of all, methamphetamines, to be consumed by everyone from factory workers to housewives to millions of German soldiers. In fact, troops regularly took rations of a form of crystal meth—the elevated energy and feelings of invincibility associated with the high even help to explain certain German military victories.

Drugs seeped all the way up to the Nazi high command and, especially, to Hitler himself. Over the course of the war, Hitler became increasingly dependent on injections of a cocktail of drugs—including a form of heroin—administered by his personal doctor. While drugs alone cannot explain the Nazis’ toxic racial theories or the events of World War II, Ohler’s investigation makes an overwhelming case that, if drugs are not taken into account, our understanding of the Third Reich is fundamentally incomplete.

Carefully researched and rivetingly readable, Blitzed throws surprising light on a history that, until now, has remained in the shadows.

“The strengths of Ohler’s account lie not only in the rich array of rare documents he mines and the archival images he reproduces to accompany the text, but also in his character studies… Ohler effectively captures Hitler’s pathetic dependence on his doctor and the bizarre intimacy of their bond…Blitzed makes for provocative reading.” —The New York Times Book Review

“A revelatory work that considers Hitler’s career in a new light. ‘Blitzed: Drugs in the Third Reich’ is that rare sort of book whose remarkable insight focuses on a subject that’s been overlooked, even disregarded by historians.” —The San Francisco Chronicle

“[A] fascinating, engrossing, often dark history of drug use in the Third Reich.”—The Washington Post

“This is Ohler’s first nonfiction book (he’s written three novels) and the first popular book of its kind, filling a gap between specialist academic literature and sensationalist TV documentaries… The book is an impressive work of scholarship, with more than two dozen pages of footnotes and the blessing of esteemed World War Two historians… Ohler offers a compelling explanation for Hitler’s erratic behavior in the final years of the war, and how the biomedical landscape of the time affected the way history unfolded… Ohler’s book makes a powerful case for the centrality of drugs to the Nazi war effort.” —The New Republic

Shaun Whiteside has translated widely in both French and German, including Sybille Steinbacher's Auschwitz: A History.
Loading...
or
Not Currently Available for Direct Purchase