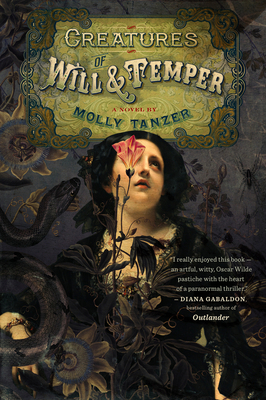 Creatures of Will and Temper (The Diabolist’s Library #1)

“A delightful, dark, and entertaining romp . . . Molly Tanzer is at the top of her form in this beautifully constructed novel.”—Jeff VanderMeer, best-selling author of the Southern Reach trilogy

Victorian London is a place of fluid social roles, vibrant arts culture, fin-de-siècle wonders . . . and dangerous underground diabolic cults. Fencer Evadne Gray cares for none of the former and knows nothing of the latter when she’s sent to London to chaperone her younger sister, aspiring art critic Dorina.
At loose ends after Dorina becomes enamored with their uncle’s friend, Lady Henrietta “Henry” Wotton, a local aristocrat and aesthete, Evadne enrolls in a fencing school. There, she meets George Cantrell, an experienced fencing master like she’s always dreamed of studying under. But soon, George shows her something more than fancy footwork—he reveals to Evadne a secret, hidden world of devilish demons and their obedient servants. George has dedicated himself to eradicating demons and diabolists alike, and now he needs Evadne’s help. But as she learns more, Evadne begins to believe that Lady Henry might actually be a diabolist . . . and even worse, she suspects Dorina might have become one too.

Combining swordplay, the supernatural, and Victorian high society, Creatures of Will and Temper reveals a familiar but strange London in a riff on Oscar Wilde’s The Picture of Dorian Gray that readers won't soon forget.

“An artful, witty, Oscar Wilde pastiche with the heart of a paranormal thriller.”—Diana Gabaldon, best-selling author of Outlander

"There are stories out there that have done wonders with their skewed versions of our shared past . . . And when someone pulls it off as well as Molly Tanzer in her new novel, Creatures of Will and Temper, it's worth checking out just to see the restraint and careful worldbuilding gymnastics required." —NPR.com

“Intriguing . . . The novel's fast-moving conclusion should satisfy anyone who misses the recent TV series “Penny Dreadful,” but Tanzer's detailed evocation of Victorian London, of Wilde's original tone and of the complex relationships . . . lends the novel its real resonance.” — Chicago Tribune

“With a satisfying mix of strong characters, lush descriptions, steady pacing, and plenty of exciting action sequences, this is a great choice for fans of supernatural fantasy set in the Victorian era.” — Booklist

“An artful, witty, Oscar Wilde pastiche with the heart of a paranormal thriller.” —Diana Gabaldon, bestselling author of Outlander

“A delightful, dark, and entertaining romp with serious intent behind it. The writing is so smart and sharp—Molly Tanzer is at the top of her form in this beautifully constructed novel. Sure to be a favorite of readers and critics alike.” —Jeff VanderMeer, bestselling author of the Southern Reach trilogy

"There has never been a better time for a spirited, feminist reinvention of The Picture of Dorian Gray. Molly Tanzer has taken a wickedly sensuous classic and transformed it into a lively supernatural tale featuring lovestruck teenagers, diabolical botanicals, mysterious paintings, and — oh, yes — demons. Creatures of Will and Temper is a wild ride from start to finish, beautifully and boldly written, and a most worthy successor to Oscar Wilde's scandalous novel." —Amy Stewart, author of Girl Waits With Gun

"Decadent Victorians clash with dueling demon-hunters in this page-turning reinvention of Oscar Wilde’s classic tale. I loved it!" —Charles Stross, award-winning author of The Delirium Brief

"Molly Tanzer's Creatures of Will and Temper is a smart, gorgeously written book about passion, loyalty, and love in many forms. And if that's not enough for you, it has demons and terrific fencing scenes! I loved this book, and you will too." —Kat Howard, award-nominated author of Roses and Rot, former competitive fencer

"Creatures of Will and Temper is a perfectly queer homage to The Picture of Dorian Gray. It follows in the spirit of Wilde's best known work while changing it, at its core, to be about the bond of sisters and the strength of women, in more than just the physical aspects. The fantastical element is a sideline to the heart of the story - it drives the plot, but it is not what makes this book so wonderful. Creatures of Will and Temper is an exploration of love: sisterly love, yes, but also romantic love, love of beautiful things, misguided love, and love for the world around us. It is a story of acceptance, of understanding, of correcting erroneous first impressions, and the bond of a disparate group of individuals in a shared bad situation. It is a timely story, and one that I think we all need right now." —Sarah Lynn Weintraub, Pandemonium Books and Games

MOLLY TANZER is the Sydney J. Bounds and Wonderland Book Award–nominated author of Vermilion (an NPR and io9 Best Book of 2015), A Pretty Mouth, the historical crime novel The Pleasure Merchant, and other works. She lives in Longmont, Colorado.
Loading...
or
Not Currently Available for Direct Purchase