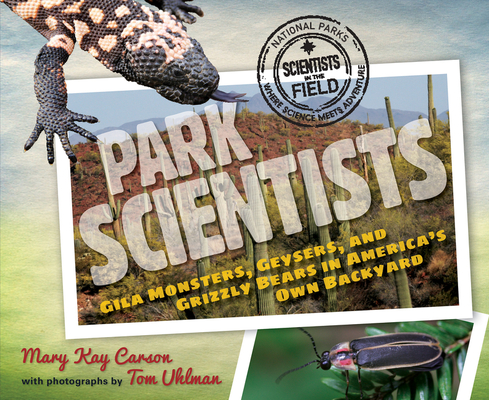 Gila Monsters, Geysers, and Grizzly Bears in America's Own Backyard (Scientists in the Field Series)

* "A well-written, unique, carefully organized treat for nature lovers and investigators."—School Library Journal, starred review   America’s national parks have been called the country’s “best idea,” and some of the best scientific ideas are happening inside these protected spaces. There are geysers and grizzlies in Yellowstone, Gila monsters and saguaro cacti in southern Arizona, and the world’s only known population of red-cheeked salamanders in the Great Smoky Mountains. And in some parks you can roll up your sleeves and actively participate as a citizen scientist. There is much to see, do and learn, right here in America’s own backyard!

Praise For Park Scientists: Gila Monsters, Geysers, and Grizzly Bears in America's Own Backyard (Scientists in the Field Series)…

"With a conversationist bent, Carson describes just how accessible these real-life 'natural laboratories and living museums' are and how each individual can act with the same spirit of inquiry as the scientist-explorers detailed here."
—Booklist

"Kids anticipating a trip to one of these parks may want to study up now and show off their impressive vocabularies when they arrive."
—Bulletin