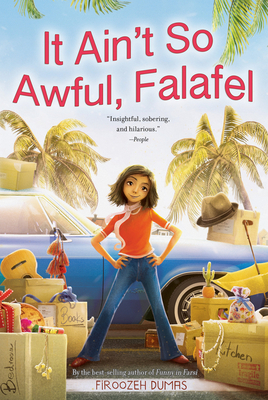 California’s Newport Beach is her family’s latest perch, and she’s determined to shuck her brainy loner persona and start afresh with a new Brady Bunch name—Cindy.

It’s the late 1970s, and fitting in becomes more difficult as Iran makes U.S. headlines with protests, revolution, and finally the taking of American hostages. Even puka shell necklaces, pool parties, and flying fish can't distract Cindy from the anti-Iran sentiments that creep way too close to home.

A poignant yet lighthearted middle grade debut from the author of the bestselling Funny in Farsi.


Praise For It Ain't So Awful, Falafel…

"This book is a sheer delight—rambunctious and rich. . . . Firoozeh Dumas writes with the perfect light touch that makes us wonder once again: Who is running the big world and why not this person, please?"  — Naomi Shihab Nye, novelist and poet

"[A]n honest, witty, and moving portrayal of what it means to be an Iranian immigrant in the late 1970s, during the Iran hostage crisis. — Scholastic Teacher Magazine

New York Times bestselling author Firoozeh Dumas was born in Abadan, Iran, and moved to Whittier, California at the age of seven. After a two-year stay, she and her family moved back to Iran and lived in Ahvaz and Tehran. Two years later, they moved back to Whittier, then to Newport Beach. She lives in Munich, Germany, with her husband and three children.
Loading...
or support indie stores by buying on