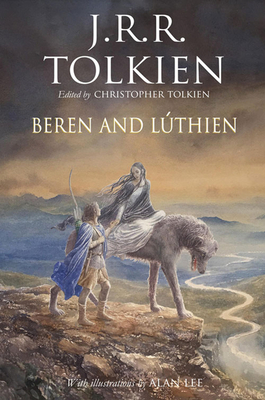 The tale of Beren and Lúthien was, or became, an essential element in the evolution of The Silmarillion, the myths and legends of the First Age of the World conceived by J.R.R. Tolkien. Returning from France and the battle of the Somme at the end of 1916, he wrote the tale in the following year.

Essential to the story, and never changed, is the fate that shadowed the love of Beren and Lúthien: for Beren was a mortal man, but Lúthien was an immortal elf. Her father, a great elvish lord, in deep opposition to Beren, imposed on him an impossible task that he must perform before he might wed Lúthien. This is the kernel of the legend; and it leads to the supremely heroic attempt of Beren and Lúthien together to rob the greatest of all evil beings, Melkor, called Morgoth, the Black Enemy, of a Silmaril.

In this book Christopher Tolkien has attempted to extract the story of Beren and Lúthien from the comprehensive work in which it was embedded; but that story was itself changing as it developed new associations within the larger history. To show something of the process whereby this legend of Middle-earth evolved over the years, he has told the story in his father's own words by giving, first, its original form, and then passages in prose and verse from later texts that illustrate the narrative as it changed. Presented together for the first time, they reveal aspects of the story, both in event and in narrative immediacy, that were afterwards lost.

Published on the tenth anniversary of the last Middle-earth book, the international bestseller The Children of Húrin, this new volume similarly includes drawings and color plates by Alan Lee, who also illustrated The Lord of the Rings and The Hobbit and went on to win Academy Awards for his work on The Lord of the Rings film trilogy.


Praise For Beren And Lúthien…

“Every version of the story in the book is incomplete, but under Christopher Tolkien’s steady editorial hand, the fragments assemble themselves to give us an impression of the whole. What makes this possible is the grace with which he handles his long-accustomed dual role of guide to both story and history. His preface and annotations are openhearted and engaging. He leads the reader pleasantly through the greater landscape of Middle-earth in the First Age, and strikes as clear a path as possible through the wilderness of Tolkien’s lifelong attempts to get the story finished and published. With eloquence and diligence and care, the son reconstructs and retraces the father’s journey, pursuing the tale through draft after draft as Tolkien pursued his vision of Middle-earth; as Beren, lost and hunted, followed the sound of Lùthien’s voice as she sang in the shadowed forest of Doriath.” — NPR.org  “A good introduction to LOTR fans nervous about taking on The Silmarillion, and also gives longtime fans a fascinating look at the Tolkiens’ myth-making process.”— EntertainmentWeekly.com  “A beautiful book.”— San Antonio Express-News —