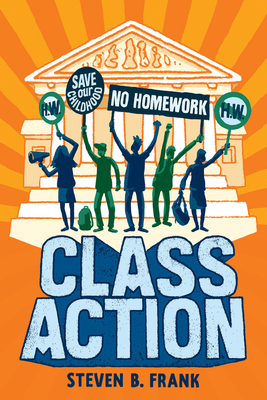 That’s what sixth grader Sam Warren tells his teacher while standing on top of his desk. He's fed up with doing endless tasks from the time he gets home to the time he goes to sleep. Suspended for his protest, Sam decides to fight back. He recruits his elderly neighbor/retired attorney Mr. Kalman to help him file a class action lawsuit on behalf of all students in Los Angeles. Their argument? Homework is unconstitutional.

With a ragtag team—aspiring masterchef Alistair, numbers gal Catalina, sports whiz Jaesang, rebel big sister Sadie and her tech-savvy boyfriend Sean—Sam takes his case to federal court. He learns about the justice system, kids’ rights, and constitutional law. And he learns that no matter how many times you get knocked down, there's always an appeal...until the nine justices have the last say.

Will Sam's quest end in an epic fail, or will he be the hero who saves childhood for all time?

"Likely to appeal to both educators and burned-out students [...] More amusing than your average civics class."--Kirkus, review

"A surprisingly compelling legal drama."--Bulletin for the Center of Children's Books