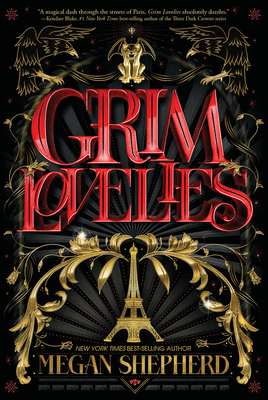 “I’ve been of fan of Megan Shepherd from the get-go, but Grim Lovelies is her best, brightest book yet! Set in a modern-day France full of magic, royalty, witches, goblins, ‘Pretties,’ and ‘Beasties,’ the servant Anouk finds herself fighting for her life and the lives of her friends as she uncovers secrets that threaten to tear the world apart. Absolutely enchanting, entrancing, and utterly unique!”
— Kate Towery, Fountain Bookstore, Richmond, VA
View the List

"A magical dash through the streets of Paris. Part caper, part fairy tale, part opulent witch society, you'll be swept away by all of it. GRIM LOVELIES absolutely dazzles." —Kendare Blake, #1 NYT bestselling author of the Three Dark Crowns series

“I lost myself in this magical book.” —Stephanie Garber, New York Times bestselling author of Caraval and Legendary


Seventeen-year-old Anouk envies the human world, where people known as Pretties lavish themselves in fast cars, high fashion, and have the freedom to fall in love. But Anouk can never have those things, because she is not really human. Enchanted from animal to human girl and forbidden to venture beyond her familiar Parisian prison, Anouk is a Beastie: destined for a life surrounded by dust bunnies and cinders serving Mada Vittora, the evil witch who spelled her into existence. That is, until one day she finds her mistress murdered in a pool of blood—and Anouk is accused of the crime.

Now, the world she always dreamed of is rife with danger. Pursued through Paris by the underground magical society known as the Haute, Anouk and her fellow Beasties only have three days to find the real killer before the spell keeping them human fades away. If they fail, they will lose the only lives they’ve ever known…but if they succeed, they could be more powerful than anyone ever bargained for.

From New York Times bestselling author Megan Shepherd, Grim Lovelies is the glittering first book in a new, epic YA fantasy series. Prepare to be spellbound by the world of Grim Lovelies, where secrets have been long buried, friends can become enemies, and everything—especially humanity—comes at a price.

"A  magical dash through the streets of Paris. Part caper, part fairy tale, part opulent witch society, you'll be swept away by all of it. GRIM LOVELIES absolutely dazzles." —Kendare Blake, #1 NYT bestselling author of the Three Dark Crowns series   “A darkly enchanting saga…bound to attract fans of Leigh Bardugo, Holly Black, and more.” —Entertainment Weekly   "A glittering and Goblin-bright fantasy. Grim Lovelies cleverly redefines fairy tales and turns Paris into a bewitching and disturbing wonderland full of Royals and witches, and beasties that will steal your heart. I lost myself in this magical book." —Stephanie Garber, New York Times bestselling author of Caraval and Legendary   "The story [has] an intriguing, almost titillating appeal...an exceptional blend of fantasy, action, and emotional drama."--The Bulletin of the Center for Children's Books, STARRED review   "Fantasy lovers will revel in Anouk’s layered world, not to mention the relationships that develop among the Beasties and their unexpected allies. Their pell-mell race against the clock brims with danger and self-realization, carefully crafted to entrance."--Booklist   "This tightly-paced novel will leave readers demanding sequels that explore more of Anouk's epic journeys"--Kirkus   "Purchase where there are fans of magical worlds."--School Library Journal   "This deliciously dark tale examines societal norms while imagining the darker side of fairy tales."--Publishers Weekly —

Megan Shepherd is the acclaimed author of The Madman's Daughter trilogy, The Cage trilogy and the middle grade novel, The Secret Horses of Briar Hill. She lives and writes on a 125-year-old farm outside Asheville, NC. Visit Megan at meganshepherd.com, on Twitter at @megan_shepherd, and on Instagram at @meganshepherdauthor.
Loading...
or
Not Currently Available for Direct Purchase