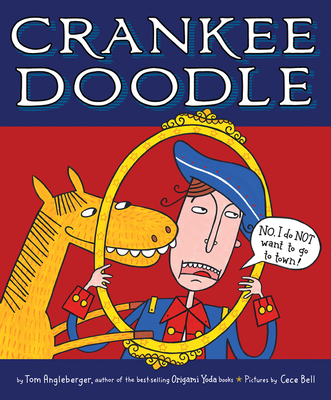 Why is this Yankee so gosh darn cranky? Find out in this hilarious take on the traditional nonsense song by New York Times bestselling author Tom Angleberger and Newbery Honor winning Cece Bell.

“A witty, accessible spin on the familiar song.” —Booklist

“Yankee Doodle went to town / a-riding on a pony / stuck a feather in his hat / and called it macaroni.” Many know the song “Yankee Doodle Dandy,” but few understand it. This unapologetically silly picture book reveals the legendary ride to town—and the whole macaroni thing—was actually the work of Mr. Doodle’s overeager pony. Mr. Doodle doesn’t want any pasta or even a trip into town. No wonder he’s so cranky!

Tom Angleberger is the author of the New York Times best-selling Origami Yoda books, as well as the Quikpick Papers and Inspector Flytrap series. Crankee Doodle is his first picture book. He lives with his wife Cece Bell, and their children in Virginia. Visit him at origamiyoda.com and on Twitter at @OrigamiYoda.

Cece Bell has written and illustrated many books for children, among them the beloved Sock Monkey books, the Geisel Award-winning Rabbit and Robot: The Sleepover, and the Newbery Honor-winning graphic novel El Deafo. She and her husband, author Tom Angleberger, have also collaborated on the picture book Crankee Doodle and the Inspector Flytrap chapter book series. She lives in Virginia with her family.

A BookPage Best Children's Book of 2013
"He does not want to go to town, buy a hat or wear a feather. But his horse is quite persuasive."
—People magazine, Best New Kids' Books
"Best-seller Angleberger of Origami Yoda fame takes on picture books, treating a younger audience to his dry and zany wit. . . . A historical hoot full of goofy, eye-rolling goodness."
—Kirkus Reviews, starred review

"As concepts for picture books go, it's hard to think of one cleverer than this absurdist deconstruction of the familiar song. . . . Readers will cheerfully hum their way through the giddily imagined argument and resolution."
—Horn Book, starred review

"By book's end, both characters have had meltdowns, prompting a Yankee change of heart and a comically anachronistic trip to town that will have readers laughing."
—Publishers Weekly

"Crankee's grouchy diatribes and his pony's affable responses make for a great read-aloud, especially when paired with a sing-along of the classic tune."
—School Library Journal