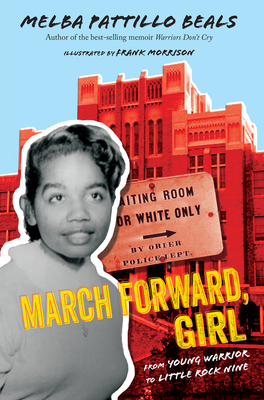 From the legendary civil rights activist and author of the million-copy selling Warriors Don't Cry comes an ardent and profound childhood memoir of growing up while facing adversity in the Jim Crow South.

Long before she was one of the Little Rock Nine, Melba Pattillo Beals was a warrior. Frustrated by the laws that kept African-Americans separate but very much unequal to whites, she had questions. Why couldn’t she drink from a "whites only" fountain? Why couldn’t she feel safe beyond home—or even within the walls of church?  Adults all told her: Hold your tongue. Be patient. Know your place. But Beals had the heart of a fighter—and the knowledge that her true place was a free one.

Combined with emotive drawings and photos, this memoir paints a vivid picture of Beals’ powerful early journey on the road to becoming a champion for equal rights, an acclaimed journalist, a best-selling author, and the recipient of this country’s highest recognition, the Congressional Gold Medal.

★ "In a visceral and vital memoir, journalist and activist Beals (Warriors Don’t Cry), who integrated Central High School as one of the Little Rock Nine, recounts growing up African-American in 1940s Arkansas 'under the umbrella of the rules and traditions of my oppression.'"- Publishers Weekly, STARRED review

"A valuable addition to the stories of life in Jim Crow America."-Kirkus, review

"Beals' recollection of white oppression and her rise above it will haunt readers. A must-read for teens."--School Library Journal

"Young readers will be gripped by Beals' personal courage and determination to march forward for civil rights at such a young age."--Booklist

Melba Pattillo Beals is the author of the bestselling WARRIORS DON’T CRY: A SEARING MEMOIR OF THE BATTLE TO INTEGRATE LITTLE ROCK’S CENTRAL HIGH and the recipient of the 1995 American Library Association Nonfiction Book of the Year award and the prestigious Robert F. Kennedy Book Award. Dr. Beals was given a Congressional Gold Medal for her role, as a fifteen-year-old, in the integration of Central High School, Little Rock, Arkansas.


Growing up in New  Jersey, Frank Morrison began developing his own style through ‘R.I.P’ art scenes that brought him considerable street recognition and local acclaim. But it wasn’t until he visited the Louvre Museum in Paris with his dancing group that he realized painting was his true creative path. His talent and hard work paid off with over 20 illustrated children’s books, including the Coretta Scott King/John Steptoe Award winner, Jazzy Miz Mozetta and the Coretta Scott King Illustrator Honor book, Little Melba and her Big Trombone. Frank lives in Georgia with his family.
Loading...
or support indie stores by buying on