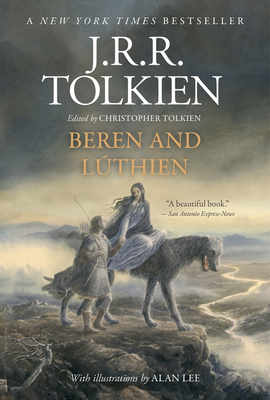 “A good introduction to LOTR fans nervous about taking on The Silmarillion, and also gives longtime fans a fascinating look at the Tolkiens’ myth-making process.”—EntertainmentWeekly.com

“With eloquence and diligence and care, the son reconstructs and retraces the father’s journey, pursuing the tale through draft after draft as Tolkien pursued his vision of Middle-earth.”—NPR.org

The epic tale of Beren and Lúthien became an essential element in the evolution of The Silmarillion, the myths and legends of J.R.R. Tolkien’s First Age of the World. Always key to the story is the fate that shadowed their love: Beren was a mortal man, Lúthien an immortal Elf. Her father, a great Elvish lord, imposed on Beren an impossible task before he might wed Lúthien: to rob the greatest of all evil beings, Melkor, of a Silmaril.
Painstakingly restored from Tolkien’s manuscripts and presented for the first time as a continuous and standalone story, Beren and Lúthien reunites fans of The Hobbit and The Lord of the Rings with Elves and Men, along with the rich landscape and creatures unique to Tolkien’s Middle-earth. Christopher Tolkien tells the story in his father’s own words by giving its original form as well as prose and verse passages from later texts that illustrate the narrative as it changed.