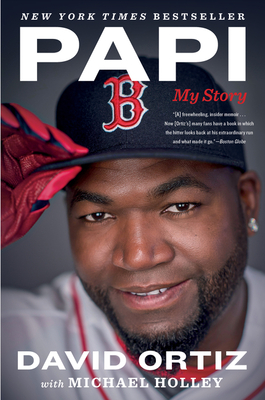 WITH A NEW AFTERWORD

“Baseball fans of all loyalties will enjoy learning about [Ortiz’s] unique experiences in and out of the game.” —Library Journal

David “Big Papi” Ortiz is a baseball icon and one of the most popular figures ever to play the game. A key part of the Boston Red Sox for fifteen years, Ortiz helped to win three World Series, bringing back a storied franchise from “never wins” to “always wins.” He helped upend the doubters, the naysayers, and the nonbelievers, and, as he launched balls into the stands again and again and again, he captured the imagination of millions of fans. Ortiz made Boston and the Red Sox his home, his place of work, and his legacy. As he put it: This is our f*&#ing city.
In Papi, his ultimate memoir, Ortiz opens up as never before. The result is a revelatory, fly-on-the-wall story of a career by a player with a lot to say at the end of his time in the game to which he gave so much and which gave so much to him.

“The rise of Ortiz from scrap-heap bench player to Hall of Famer is an unlikely and entertaining story, and engagingly told . . . The memoir lives up to its ‘no-holds-barred’ billing.” —Washington Post

DAVID ORTIZ, nicknamed “Big Papi,” is a ten-time major league All-Star, three-time World Series champion, and the all-time MLB record holder for home runs, RBIs, and hits by a designated hitter. In 2015, Ortiz was voted as one of the four greatest players in Boston Red Sox history—along with Ted Williams, Carl Yastrzemski, and Pedro Martinez—by Red Sox fans. He lives in Boston, Massachusetts.

MICHAEL HOLLEY is the New York Times best-selling author of Patriot Reign, War Room, and Red Sox Rule. A former reporter and columnist for the Boston Globe and Chicago Tribune, Holley has also appeared on ESPN's popular show Around the Horn and on Fox Sports Net's I, MAX. He is currently a host of WEEI’s popular radio show Dale & Holley.
Loading...
or support indie stores by buying on