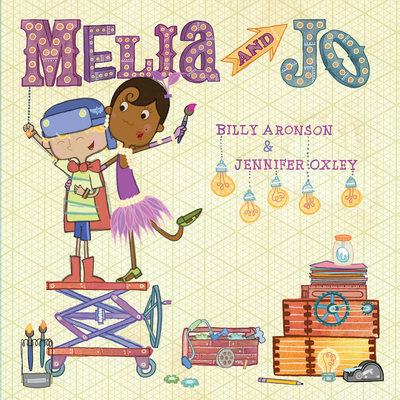 Melia and Jo will be to STEAM what Rosie Revere is to STEM.

Melia is scientific and loves to create things in her backyard laboratory, but something is missing. Her inventions just aren’t quite right. Enter Jo, her new friend with an artistic spirit. When you add the arts to sciences, something magical happens! This whimsically illustrated picture book is the perfect introduction to the benefits of STEAM-focused curriculum.

Billy Aronson’s work in the theater includes the original concept/additional lyrics for the Broadway musical Rent. His plays have been published in 6 volumes of Best American Short Plays, and collected in Funny Shorts. TV writing credits include The Wonder Pets, Beavis and Butt-head, and Courage the Cowardly Dog. With artist Jennifer Oxley he created the PBS Kids show Peg + Cat, which has won Emmy Awards for music, design, writing, acting, and Best Animated Preschool Show. With wife Lisa Vogel he created their animated offspring Jake and Anna.

Jennifer Oxley was born in Hollywood, California, and caught the filmmaking bug early – she made her first film at the age of seven. Since then she has directed fifteen short films for Sesame Street, as well as the award-winning adaptation of Spike Lee and Tanya Lewis Lee’s children’s book, Please, Baby, Please. Her latest film, The Music Box, was acquired by The Museum of Modern Art for their permanent children’s film collection. Her work in children’s television includes directing and artistic credits. Jennifer won an Emmy award for her role as director on Little Bill, and she created the look and animation style of The Wonder Pets. Most recently Jennifer teamed up with Billy Aronson to create the hit PBS Kids animated series Peg + Cat!

Praise For Melia and Jo…

"A delightful story of a cross-racial friendship between two kids who realize how much they need each other and the passions that each brings to the friendship."--Kirkus, STARRED review

"A great book for encouraging kids to apply themselves to the STEAM disciplines, work together, and make friends. A strong choice."--School Library Journal