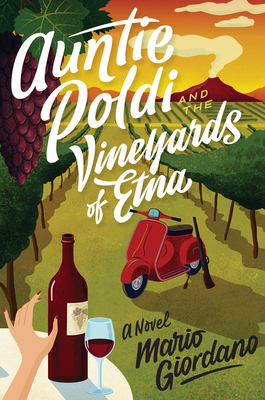 When Auntie Poldi finds a body in a vineyard, she sets out to solve another murder—with the Mafia nipping at her heels—in the next adventure from this national bestselling “smash series.” (People Magazine)

“There’s a new star in the mystery firmament, and her name is Auntie Poldi.” — Alan Bradley

When Prosecco‑loving Auntie Poldi retired to Sicily from Germany, she never dreamed her tranquil days would be interrupted by murder. But Sicily had other plans, and Poldi found herself honor‑bound to solve the disappearance of her beloved (and cute) handyman.

Now she’s finally ready for some peace and quiet—interrupted by romantic encounters with handsome Chief Inspector Montana, of course—when the water supply to her neighborhood is cut off and a dear friend’s dog is poisoned, telltale signs that a certain familial organization is flexing its muscles. Poldi knows there will be no resolution without her help. She soon finds a body in a vineyard, tangles with the Mafia, and yet again makes herself unpopular in the pursuit of justice. But once wine and murder mix, how could she possibly stay away?

Originally published in the UK as Auntie Poldi and the Fruits of the Lord, this is a sexy and thrilling follow‑up to Mario Giordano's debut novel, Auntie Poldi and the Sicilian Lions, hailed by Adriana Trigiani as “an explosion of color [and] a celebration of the palette of Italian life and the Sicilian experience in its specificity, warmth and drama.”

“Great armchair traveling and detection, bringing a strong note of the sensual back to the southern European mystery.” –CrimeReads, “The Most Anticipated Crime Books of 2019”

"Giordano gives his heroine's second outing as much punch as her debut. Long may she reign.” –Kirkus, starred review

"Sharp, hilarious...particularly fun and well executed [with] humorous observations on the quirks of Sicilian life. Readers will look forward to the further adventures of the irrepressible Auntie Poldi.” –Publisher’s Weekly, starred review

Praise for Auntie Poldi and the Sicilian Lions:

“Break out the prosecco! There’s a new detective in town – and she’s 60, sexy, wise and utterly adorable.”—People

“A new detective is among us. Mario Giordano’s Auntie Poldi joins her peers Andrea Camilleri’s Inspector Montalbano and Alexander McCall Smith’s Mma Precious Ramotswe in winning our hearts. She’s a lusty, bold woman who dives into Sicilian life with gusto.”—Frances Mayes, author of Under the Tuscan Sun

“There’s a new star in the mystery firmament, and her name is Auntie Poldi.”—Alan Bradley, author of The Sweetness at the Bottom of the Pie

“To the ranks of amateur sleuths from Miss Marple to Jessica Fletcher, welcome Auntie Poldi.”—Newsday

“As types of amateur sleuths go, the category of lusty Bavarian widow has been woefully underrepresented—until now.”—Booklist (starred review)

John Brownjohn lives in Dorset in the UK. His work has won him critical acclaim and numerous awards on both sides of the Atlantic, including the Schlegel-Tieck Prize (three times), the PEN American Center's Goethe House Prize, and the Helen and Kurt Wolff Prize for Marcel Beyer's The Karnau Tapes and Thomas Brussig's Heroes Like Us.
Loading...
or
Not Currently Available for Direct Purchase