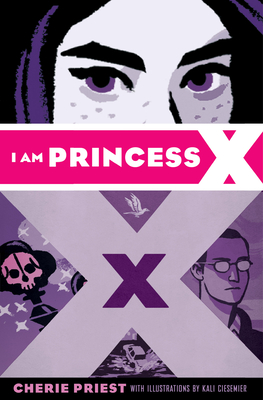 I Am Princess X (Paperback)

Best friends, big fans, a mysterious webcomic, and a long-lost girl collide in this riveting novel, illustrated throughout with comics, and now out in paperback.
Once upon a time, two best friends created a princess together. Libby drew the pictures, May wrote the tales, and their heroine, Princess X, slayed all the dragons and scaled all the mountains their imaginations could conjure.

Once upon a few years later, Libby was in the car with her mom, driving across the Ballard Bridge on a rainy night. When the car went over the side, Libby passed away, and Princess X died with her.

Once upon a now: May is sixteen and lonely, wandering the streets of Seattle, when she sees a sticker slapped in a corner window.

When May looks around, she sees the Princess everywhere: Stickers. Patches. Graffiti. There's an entire underground culture, focused around a webcomic at IAmPrincessX.com. The more May explores the webcomic, the more she sees disturbing similarities between Libby's story and Princess X online. And that means that only one person could have started this phenomenon -- her best friend, Libby, who lives.

Cherie Priest is the author of I Am Princess X, her debut young adult novel which earned three starred reviews and was a YALSA Quick Pick for Reluctant Young Adult Readers. She is also the author of more than a dozen adult science fiction, fantasy, and horror novels, including Boneshaker, which won the Locus Award for Best Science Fiction Novel. She lives in Seattle, Washington and can be found online at www.cheriepriest.com and @cmpriest.

Kali Ciesemier's work has appeared in the New Yorker, the Los Angeles Times, Ebony, Mental Floss, and many other publications. She lives in New York. Please visit her website at www.ciesemier.com and follow her on Twitter at @kalidraws.

Praise For I Am Princess X…

*"Priest's YA debut is an engrossing cyberthriller packed with a puzzling mystery, crackerjack detective work, and an eerie, atmospheric sense of place. Teens who roll their eyes at adults out of touch with Internet culture will eat this up." -- Booklist, starred review

*"Fresh and contemporary, this hybrid novel/comic packs a lot of plot in a relatively short book, but its strongest suit may be Priest's keen understanding of the chasmic gap between the way teens and adults engage in the landscape of the Internet." -- Publishers Weekly, starred review
or support indie stores by buying on
Copyright © 2020 American Booksellers Association