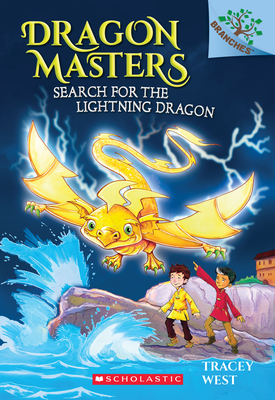 Search for the Lightning Dragon

Praise For Search for the Lightning Dragon: A Branches Book (Dragon Masters #7)…

USA Today bestselling series!
Praise for Dragon Masters #1:
"In this first of the Dragon Masters series, vocabulary is accessible; sentences, paragraphs, and chapters are short; and dialogue moves the story along rapidly. Black-and-white sketch-type drawings add depth to the story and feelings to the characters (both children and dragons). Emergent readers will find happy success here." -- Booklist

"The first of a new series of early chapter books, this entry is sure to attract fans. Brief chapters, large print, lots of action, attractive illustrations in every spread including a maplike panorama, an enviable protagonist -- who wouldn't want to be a Dragon Master? -- all combine to make an entertaining read. With plenty left to be resolved, the next entry will be eagerly sought after." -- Kirkus Reviews

Damien Jones spent his childhood daydreaming and drawing. He attended the Arts Institute of Bournemouth where he gained a BA Hons in Animation Production. He worked as an animator on films like the Oscar-nominated feature film L'illusionniste (2010) before beginning his career in book illustration. He has worked with publishers such as Simon & Schuster, Random House, and Scholastic. He lives in Cornwall, UK, with his family.
or support indie stores by buying on