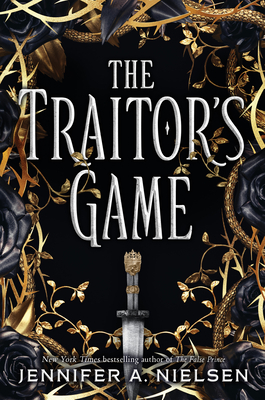 Hearts and loyalties collide in this electrifying New York Times bestseller from critically acclaimed author Jennifer A. Nielsen -- in paperback alongside Book Two!
Jennifer A. Nielsen's New York Times bestseller The Traitor's Game, which Entertainment Weekly called "the next big YA fantasy," is perfect for fans of the Red Queen series by Victoria Aveyard and the Throne of Glass series by Sarah J. Maas.

Kestra Dallisor has spent three years in exile in the Lava Fields, but that won't stop her from being drawn back into her father's palace politics. He's second-in-command to the cruel king, Lord Endrick, which makes Kestra a valuable bargaining chip. A group of rebels knows this -- and they snatch Kestra from her carriage as she reluctantly travels home.

The kidnappers want her to retrieve the lost Olden Blade, the only object that can destroy the king, but Kestra is not the obedient captive they expected. One of the rebels, Simon, has his hands full as Kestra tries to foil their plot, by any means necessary. As motives shift and secrets emerge, both have to decide what -- and who -- it is they're fighting for.

"Nielsen creates wonderful characters in all of her novels, and she is especially talented at writing complex, intriguing females who refuse to fit into any neat categories. The first in her engrossing Traitor's Game series introduces readers to another fascinating heroine, who disrupts the plans and plots laid to trap her and insists on controlling her own narrative...Engrossing, emotional and offers plenty of promise for the series to come." -- RT Book Reviews

"This rip-roaring tale has action galore with battle scenes, kidnappings, murder, intrigue, and romance... Nielsen has created a compelling world where little is as it seems." -- School Library Connection

"The Traitor's Game by Jennifer A. Nielsen, is an action-packed story that leaves you yearning for more. The new book is an amazing addition to Nielsen's repertoire . . . Fit with a feisty heroine and some tough kidnappers, The Traitor's Game keeps you on the edge of your seat throughout." -- The Missourian


Praise for the Mark of the Thief Trilogy:

A Chicago Public Library "Best of the Best" Children's Book

Jennifer A. Nielsen is the acclaimed author of the New York Times and USA Today bestselling Ascendance Series: The False Prince, The Runaway King, The Shadow Throne, and The Captive Kingdom. She also wrote the New York Times bestselling Mark of the Thief trilogy: Mark of the Thief, Rise of the Wolf, and Wrath of the Storm; the stand-alone fantasy The Scourge; the historical thrillers A Night Divided, Resistance, and Words on Fire; the second book in the Horizon series, Deadzone; Book Six of the Infinity Ring series, Behind Enemy Lines; and The Traitor's Game series: The Traitor's Game, The Deceiver's Heart, and The Warrior's Curse. Jennifer lives in northern Utah with her husband, their children, and a perpetually muddy dog.
Loading...
or support indie stores by buying on