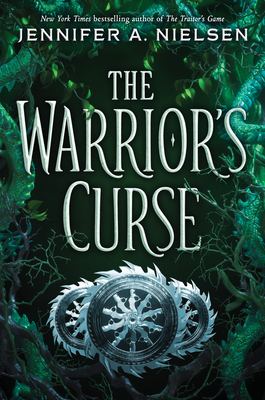 The stunning third book in Jennifer A. Nielsen's New York Times bestselling Traitor's Game series!
Simon and Kestra are hurtling down paths ever farther from each other as the battle for control of Antora rages.

Simon, newly king of the Halderians, is pressed on all sides by royal duties. Harlyn Mindell is his betrothed and intended queen, but Simon can't give up hope for a life with Kestra.

Kestra, exiled, feels her magic growing -- and despite everyone's warnings, she knows she must embrace it. That power is the key to the kingdom's future.

Both still strive to defeat the evil Lord Endrick, but danger awaits them on the murky road forward. And is a common enemy enough to help them survive -- or to carry them back to each other?

Jennifer A. Nielsen delivers breathtaking twists and shocking revelations in an epic and action-packed third installment of The Traitor's Game.

Praise For The Warrior's Curse (The Traitor's Game, Book 3)…

Praise for The Traitor's Game:

"Nielsen creates wonderful characters in all of her novels, and she is especially talented at writing complex, intriguing females who refuse to fit into any neat categories. The first in her engrossing Traitor's Game series introduces readers to another fascinating heroine, who disrupts the plans and plots laid to trap her and insists on controlling her own narrative....Engrossing, emotional and offers plenty of promise for the series to come." -- RT Book Reviews

"This rip-roaring tale has action galore with battle scenes, kidnappings, murder, intrigue, and romance....Nielsen has created a compelling world where little is as it seems." -- School Library Connection

"The Traitor's Game by Jennifer A. Nielsen is an action-packed story that leaves you yearning for more. The new book is an amazing addition to Nielsen's repertoire . . . Fit with a feisty heroine and some tough kidnappers, The Traitor's Game keeps you on the edge of your seat throughout." -- The Missourian


Praise for the Mark of the Thief Trilogy: