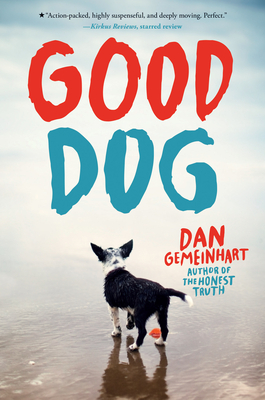 Brodie was a good dog. And good dogs go to heaven.

Except Brodie can't move on. Not just yet. As wonderful as his glimpse of the afterlife is, he can't forget the boy he left behind. The boy he loved, and who loved him in return.

The boy who's still in danger.

So Brodie breaks the rules of heaven. He returns to Earth as a spirit. With the help of two other lost souls -- lovable pitbull Tuck and surly housecat Patsy -- he is determined to find his boy and to save him.

Even if it costs him paradise. Even if he loses his eternal soul.

Because it's what a good dog would do.

"This is a terrific book, morally thoughtful and wonderfully well told, that 9- to 14-year-olds are likely to cover at a gallop." -- The Wall Street Journal

An Amazon.com Best Book of the Month
A Junior Library Guild selection

*"Lord of the Flies set on Alcatraz... It's grotesque, compelling, over-the-top, yet fully realized, and nothing like Gemeinhart's previous work. Children who respond to it well will read it over and over again." -- Kirkus Reviews, starred review

"Holes meets Lord of the Flies in this fast-paced novel... Told with pathos and compassion, this rises above the label of survival story and examines the way truth and redemption are interconnected in one troubled boy's life." -- Booklist

"A poignant, action-packed story with references to classics Robinson Crusoe and Lord of the Flies... Gemeinhart creates a compulsively readable story with enough teasers to keep the mystery alive until the very end." -- School Library Journal

Dan Gemeinhart is a teacher-librarian and father of three daughters. His debut novel, The Honest Truth, was a New York Times Editors' Choice selection, an Amazon.com Best Book of the Month, and an Indie Next List pick. His follow-up, Some Kind of Courage, was met with critical acclaim, garnering two starred reviews. Dan lives with his family in Cashmere, Washington. Visit him at dangemeinhart.com.
or support indie stores by buying on