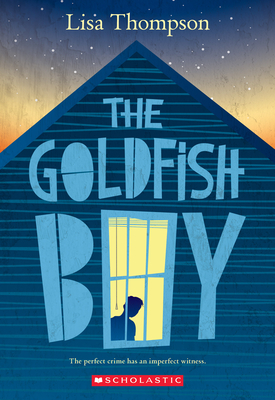 Lisa Thompson's debut novel is a page-turning mystery with an emotionally-driven, complex character study at its core -- like Rear Window meets The Curious Incident of the Dog in the Night-Time.

Matthew Corbin suffers from severe obsessive-compulsive disorder. He hasn't been to school in weeks. His hands are cracked and bleeding from cleaning. He refuses to leave his bedroom. To pass the time, he observes his neighbors from his bedroom window, making mundane notes about their habits as they bustle about the cul-de-sac.

When a toddler staying next door goes missing, it becomes apparent that Matthew was the last person to see him alive. Suddenly, Matthew finds himself at the center of a high-stakes mystery, and every one of his neighbors is a suspect. Matthew is the key to figuring out what happened and potentially saving a child's life... but is he able to do so if it means exposing his own secrets, and stepping out from the safety of his home?

Lisa Thompson is the author of The Goldfish Boy and The Light Jar. She has worked as a radio broadcast assistant, first at the BBC and then for an independent production company making plays and comedy programs. During this time she got to make tea for lots of famous people. She lives in Suffolk, England, with her family. Find her on Twitter at @lthompsonwrites and lisathompsonauthor.com.

Praise For The Goldfish Boy…

* "Thompson strikes the perfect balance, seemingly without compromise, between an issue-driven novel and one with broad, commercial appeal. This empathetic debut is a middle-grade whodunit with a very special heart." --Kirkus Reviews, starred review

"A multilayered mystery at once suspenseful and heartrending." --Booklist

"The novel successfully weaves Matthew's personal struggle with obsessive-compulsive disorder and the search for the missing toddler into a compelling story with a hearty dose of mystery and adventure." --School Library Journal

"This book is filled with intriguing characters and tragic, mysterious pasts. Thompson has created a modern teenage tale interwoven with classic literary themes like loss, guilt, neglect, and loneliness. This is a story for everyone, featuring mystery, drama, and enough realism to inspire students to research and understand the complexities of the mind." --School Library Connection

“Heart and humour, along with a strong message about the value of family, friends and facing fears [...] make this assured debut stand out.” -- Observer

“Both a genuine mystery and an emotionally charged examination of fear and loneliness, this is a terrific read with warmly engaging characters.” --Daily Mail

“This carefully judged, poignant story should help those with OCD feel less alone–and help others to understand the impulses behind painful acts of repetition.” --Guardian

“A genuinely clever mystery.” --Robin Stevens, author of the Murder Most Unladylike series

“A great cast of characters and an intriguing mystery–I loved it!” --Ross Welford, author of Time Travelling with a Hamster
or
Buy Here
Copyright © 2020 American Booksellers Association