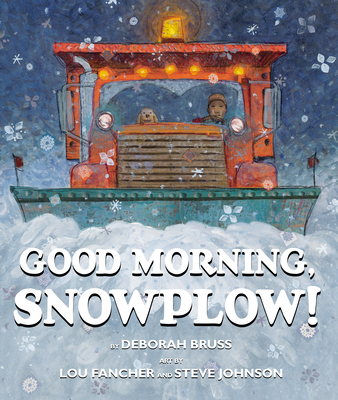 As the rest of the town settles in to bed, one man, his dog, and a trusty snowplow get ready for a night's work. Follow them through slick roads and swirling drifts in this sweet, rhyming book by Deborah Bruss and New York Times bestselling illustrators Lou Fancher and Steve Johnson.

Deborah Bruss is the author Book! Book! Book!, published by Arthur A. Levine Books. As a child, Deborah did not enjoy writing, and even attempted to avoid writing-intensive classes in high school. She did not overcome her fear of writing until she reached college and began her career as an author when she was in her thirties.
Deborah has worked as a substitute teacher and a school librarian. Her hobbies include traveling, sailing, swimming, adaptive skiing and singing with a female musical group, the Songweavers. Deborah lives in rural New Hampshire with her husband Michael, her sons Nathanial and Isaac, and her daughters Bayshay and Isatu.

New York Times bestselling illustrators Steve Johnson and Lou Fancher have collaborated on over 45 picture books together. Their work has appeared in annual reports, advertisements, magazines, and movies, including Toy Story and A Bug’s Life, for which they provided pre-production set and character designs.
No Star Nights was their first children’s book. Together, they have illustrated The Salamander Room by Anne Mazer; Felix Salten’s Bambi, adapted by Janet Schulman; Cat, You Better Come Home by Garrison Keillor; My Many Colored Days by Dr. Seuss; The Velveteen Rabbit abridged by Lou Fancher; and Amazing Peace by Maya Angelou. They have been recognized on the New York Times Best Illustrated Books list and are recipients of a gold medal from the Society of Illustrators. Steve and Lou live in Moraga, California.

"The text is written in the second person, speaking to the driver and the snowplow and encouraging them on through the night. The illustrations are beautifully made with multiple media, creating different textures that both pop and add depth. Strong lines describe the town, vehicles, and people, but the snow is made to look soft and fluffy. Delicate and detailed snowflakes are stamped over the images to create the effect of snow falling. This book shines light on a lesser-known occupation and gives recognition to the hard work done to keep our roads clear and safe in the snow...A great addition to any big-machines collection." -- Kirkus
or support indie stores by buying on
Copyright © 2020 American Booksellers Association