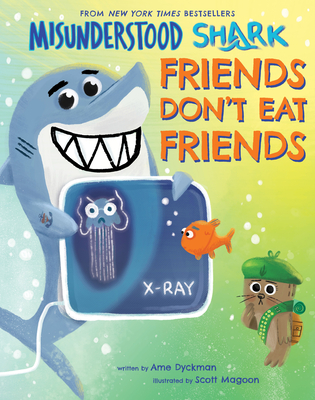 In this new Misunderstood Shark story from New York Times bestselling duo Ame Dyckman and Scott Magoon, Shark dares to ask the question: Can friends eat friends (and get away with it)?
Last time on Underwater World with Bob Jellyfish...
"SHARK ATE ME! Now get me OUT, Shark!"
"That's strange! I can hear Bob, but I can't see Bob!"

This hilarious follow-up to Misunderstood Shark by New York Times bestselling duo Ame Dyckman and Scott Magoon tackles what it really means to be a good friend. Bob is already irate that Shark has eaten him, but when Shark doesn't admit to eating him, Bob is so mad he declares that the ocean isn't big enough for both of them! Friends Don't Eat Friends is exploding with over-the-top humor and awesome marine facts! For example, when Shark overdoses on Finilla Ice Cream after fighting with Bob, we learn that shark teeth are coated with fluoride. Lucky for Shark, he can't get cavities! Join Shark and the gang for another story and find out if Shark learns his lesson about friendship, or if he really is just misunderstood -- again!

Ame Dyckman is the award-winning author of picture books Boy + Bot, Tea Party Rules, the New York Times bestselling Wolfie the Bunny, Horrible Bear!, and You Don't Want a Unicorn! Ame lives in central New Jersey with her family, and, of course, the characters from her stories. She's currently building a homemade swimming pool for the protagonist of her upcoming series, Misunderstood Shark -- mostly so she can have her bathtub back.

Scott Magoon grew up in New England, and still lives in Boston with his family. He's an art director, designer, and illustrator, and he loves making books for kids. He's the illustrator of the bestselling Nuts series with author Eric Litwin; Spoon and Chopsticks, both written by Amy Krouse Rosenthal; and I Will Not Eat You by author Adam Lehrhaupt. He's also written and illustrated Breathe and The Boy Who Cried Bigfoot.

"In this delicious sequel to Misunderstood Shark (2018), the action picks up without a hitch... Definitely one to dish up alongside Ryan T. Higgins' We Don't Eat Our Classmates (2018) . . . and other culinary-themed disquisitions on social proprieties." --Booklist

"The over-the-top humor, comical asides from the TV crew, and Magoon's boisterous, candycolored artwork, in thick lines and cartoonish shapes, will lure in many a reader. The sneaky shark facts will go down easy in this uproariously silly picture book." -- Booklist

"Magoon's cartooning is both funny and visually striking... and the playful typography used for Dyckman's rapid-fire dialogue makes her blooper-reel humor even funnier." -- PublishersWeekly

"Fun and playful... or so Shark would have us believe." -- Kirkus Reviews

"As she does in her title Wolfie the Bunny and Boy + Bot, Dyckman hits the mark of both hilarious and sweet. Magoon's illustrations... make up a fabulous cast that swim around in cool-colored waters, ranging from bright greens to deep indigos. VERDICT: Make no mistake, this is a fun addition to any collection, best for reading close-up and one-on-one." --School Library Journal
or support indie stores by buying on
Copyright © 2020 American Booksellers Association