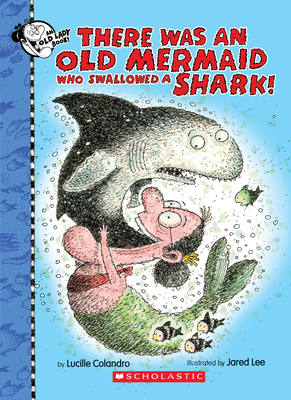 Scholastic's bestselling Old Lady stars in a brand-new adventure series for beginning readers chock-full of hilarious laughs and fun facts!There was an old mermaid who swallowed a shark. I don't know why she swallowed a shark, but it left no mark!Scholastic's bestselling Old Lady is starring in a brand-new adventure series that will make you laugh AND learn! In this new spin-off, the Old Lady turns into an Old Mermaid, travels down into the ocean, and swallows a shark . . . and a squid, and a fish, and an eel, and a crab, and a sea star, and a clam . . . Why? Well, it was fun to cram her mouth with a clam! Two new characters lead the reader through this hilarious adventure while exchanging some awesome facts about the creatures down under for a light take on nonfiction that's perfect for this age. With expanded sea creature back matter and a search-and-find game at the end, this Old Mermaid is making quite a splash!

Jared Lee has illustrated more than 100 books for young readers. He has received awards from the Society of Illustrators, the Martha Kinney Cooper Ohioana Library Association, the National Cartoonists Society, and others. He lives in Ohio with his wife and a menagerie of dogs, cats, ponies, ducks, and a few unknown creatures.
Lucille Colandro has written many books for children, including the bestselling There Was an Old Lady series illustrated by Jared Lee.
Loading...
or support indie stores by buying on