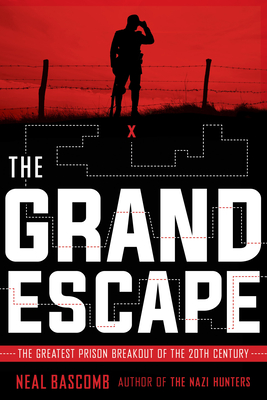 Neal Bascomb, author of The Nazi Hunters, returns with his next thrilling work of narrative nonfiction about a group of Allied POWs who staged an escape for the ages during World War I. Illustrated throughout with incredible photographs and published on the 100th anniversary of the Holzminden escape!

At the height of World War I, as battles raged in the trenches and in the air, another struggle for survival was being waged in the most notorious POW camp in all of Germany: Holzminden. A land-locked Alcatraz of sorts, it was home to the most troublesome Allied prisoners--and the most talented at escape. The Grand Escape tells the remarkable tale of a band of pilots who pulled off an ingenious plan and made it out of enemy territory in the biggest breakout of WWI, inspiring their countrymen in the darkest hours of the war.

Praise for The Grand Escape:

* "Bascomb does an extraordinary job of bringing the principal escapees to life.... His account of the Herculean task of digging of the tunnel is fascinating, viscerally evoking the claustrophobic act. He also invests his account with page-turning suspense and colorful detail. The narrative is enhanced by the inclusion of generous period photographs and contemporary maps and charts. Altogether the book is a marvel of research and an example of narrative nonfiction at its finest. It's a grand adventure." -- Booklist, starred review

* "Suspenseful reading, enhanced by diagrams and photographs. A fine escapade related with proper drama and likely to be news even to well-read young historians." -- Kirkus Reviews, starred review

* "It is a tale of triumph that became a template for future prisoners of war, and Bascomb's heavy, well-cited research provides the information readers need.... A fantastic pick for avid history readers." -- School Library Journal, starred review

"Plenty of photographs put faces to the escapees, and diagrams and maps illuminate the prison layout, tunnel, and destinations for border crossing. An introductory "List of Participants" is handy for reader review, and sources notes, bibliography, and index direct readers pursuing research. This, however, is a real-life thriller that's too compelling to relegate merely to World War I report writers." -- Bulletin of the Center for Children's Books

Praise for The Escape Artists:

* "Fast-paced account of a forgotten episode of World War I history.... Bascomb's portraits of the principals are affecting.... Expertly narrated, with just the right level of detail and drama." -- Kirkus Reviews

"Paul Brickhill's The Great Escape (1950) is widely considered the best nonfiction book about escapes from wartime prison camps. This gripping new volume gives Brickhill's classic a run for its money.... The book is intensely detailed and written with a prose style that puts readers right there in the camp with the prisoners: when the prisoners hold their breath, terrified of being discovered in a secret activity, the reader will hold his or her breath, too. In the ever-expanding genre of prison-escape sagas, this one joins the top ranks." -- Booklist

"A rousing story of resilience and courage... Impeccable research and a page-turning narrative." -- Tom Clavin, author of Dodge City

"Don't wait for the movie. You'll feel like you're in one by the second page... In the midst of history's cruelest war, a band of Allied POWs brilliantly combined their unique talents, wit, and boundless grit to pull off the greatest breakout of the Great War." -- John U. Bacon, author of The Great Halifax Explosion
or support indie stores by buying on
Copyright © 2020 American Booksellers Association