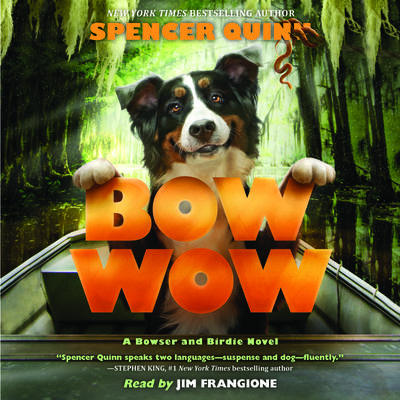 A Bowser and Birdie Novel

"Spencer Quinn speaks two languages -- suspense and dog -- fluently." -- Stephen KingNarrator: Jim FrangioneA bull shark in the swamp? No one in the Louisiana town of St. Roch believes it at first, but when a local boy has a face-to-face encounter with the toothy monster, every big fisherman is called out for the hunt. There's a big cash bounty on the shark.Sharp-eyed Birdie Gaux and her handsome dog Bowser can't help noticing that shark fever is causing some shady doings in town. For instance, where is Snoozy, the clerk who works at the Gaux family fishing store? He's the town's best fisherman, but suddenly he's missing. Is a rival bounty hunter behind Snoozy's suspicious disappearance? Or perhaps the marine biologist who said he'll do anything to keep the shark alive?Birdie and Bowser are determined to find Snoozy and bring him home safe, but the job is more dangerous than they know. Bowser better practice his paddling: He and Birdie are heading for deep waters . . .