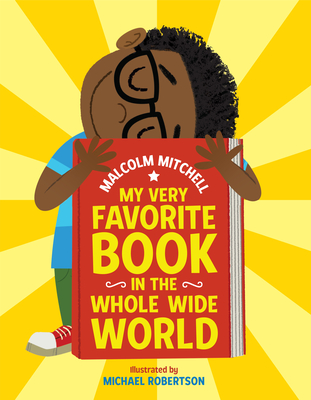 My Very Favorite Book in the Whole Wide World

From Super Bowl champion and literacy crusader Malcolm Mitchell comes an exciting new story that shows even reluctant readers that there is a book out there for everyone!

Meet Henley, an all-around good kid, who hates to read. When he's supposed to be reading, he would rather do anything else. But one day, he gets the scariest homework assignment in the world: find your favorite book to share with the class tomorrow.

What's a kid to do? How can Henley find a story that speaks to everything inside of him?

Malcolm Mitchell, bestselling author of The Magician's Hat, pulls from his own literary triumph to deliver another hilarous and empowering picture book for readers of all abilities. Through his advocacy and his books, Malcolm imparts the important message that every story has the potential to become a favorite.


Praise For My Very Favorite Book in the Whole Wide World…

Praise for The Magician's Hat:

"Mitchell proves to have a touch of magic as an author as well as on the field." -- Kirkus Reviews

"Malcolm Mitchell's mission is to inspire readers. The Magician's Hat will cast its spell on you!" -- Jeff Kinney, bestselling author of the Diary of a Wimpy Kid series

"Malcolm Mitchell is changing the world through the power of reading." -- Dav Pilkey, bestselling creator of the Dog Man and Captain Underpants series

Malcolm Mitchell is the rookie who helped the New England Patriots win Super Bowl LI. He's also the founder of an initiative called Read with Malcolm, which introduces book ownership to students, and works to improve literacy in schools. Malcolm's Share the Magic Foundation promotes the benefits of reading to kids in underserved communities. As the New England Patriots Summer Reading Ambassador, he encourages summer reading. He lives in Atlanta, Georgia.

Born and raised in northern Ohio, Michael Robertson graduated from Bowling Green State University with a degree in painting. He spent 10 years as a toy designer and character developer, before trying his hand at illustration. His work has appeared on many children's products, greeting cards, books, toys, and magazines, and has received multiple recognitions from the Society of Illustrators.
Loading...
or support indie stores by buying on