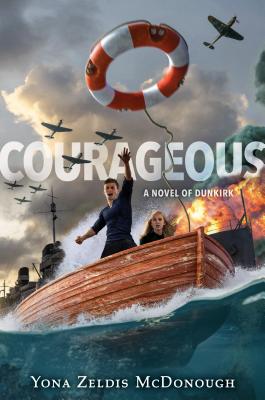 Aiden is the son of a fisherman on the south coast of England, and he's feared the ocean since his oldest brother's ship was sunk by a German U-boat.

But that doesn't matter when he and his best friend Sally hear chatter on their radio. Allied troops, including Aiden's surviving brother, are trapped in France, surrounded by German forces. The British military have come up with a daring plan to save as many troops as possible, bringing them across the Channel to safety -- but they'll need every boat they can get their hands on.

Aiden's parents forbid him from going, but he and Sally know they can help, and set off to join Operation Dynamo on their own. It's a harrowing journey, and the pair are in grave danger as they help ferry troops from Dunkirk, searching for Aiden's brother all the while. It will take an entire village for them to realize that as long as people are willing to help those who need it, there's hope for a brighter tomorrow.

Praise for The Bicycle Spy:

"A fine story of war, friendship, and taking a stand against injustice." -- Kirkus Reviews

"Clearly written, suspenseful, and accessible to a younger audience . . . An engaging story." -- Booklist

Yona Zeldis McDonough is the award-winning author of 27 books for children and seven novels for adults. Her essays, articles, and short fiction have appeared in numerous national and literary publications. She is also the fiction editor of Lilith magazine. McDonough lives in Brooklyn with her husband and their two children.
Loading...
or support indie stores by buying on