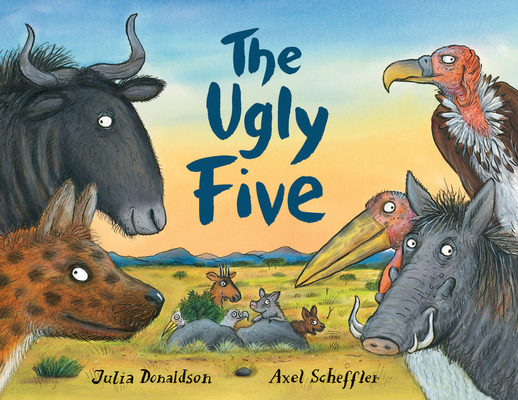 A charming new picture book from the bestselling creators of The Gruffalo and Room on the Broom!
Meet Wildebeest, Warthog, Spotted Hyena, Lappet-Faced Vulture, and Marabou Stork. On the African savanna, they're known as the Ugly Five, but for all their bumps and bristles, these animals are just as lovable and intriguing as their more celebrated counterparts.

Told in Julia Donaldson's signature rollicking rhymes, with Axel Scheffler's rich and witty illustrations, this tale of taking pride in who you are shows that not every animal has to have a glorious mane or an impressive roar to win the hearts of readers everywhere.

Praise For The Ugly Five…

Praise for A Gold Star for Zog:

"Donaldson, the current children's laureate in Britain, is a master of witty comic rhyme and original stories with heart. Here she and Scheffler outdo themselves with the smart, funny -- dare I say, deep? -- story of a dragon in training, a princess who wants to be a doctor and a knight who could use a bit of rescuing. The book gets a gold star too." -- New York Times

"While Scheffler's characters are straight out of fantasy, they exude a sweet, down-to-earth quality that makes them instantly sympathetic. Readers will get a kick out of the genial self-awareness in his cartooning -- on almost every spread, a character glances at the audience as if to say, 'Can you believe this?'" -- Publishers Weekly

* "The unlikely superhero with his googly eyes and winning smile will be a hit, and the rhythmic rhyme will have audiences chanting along by the end of the story... Silly and slimy -- superfun!" -- Kirkus Reviews, starred review

* "Donaldson's rhymes never skip a beat, and Scheffler personalizes the many animals, people and settings in his witty watercolors. This yarn could become a December perennial." -- Publishers Weekly, starred review

Julia Donaldson served as the UK Children's Laureate from 2011 to 2013 and has written many bestselling and beloved picture books and novels for young readers. She lives in Glasgow, Scotland, with her husband, Malcolm.

Axel Scheffler's award-winning books include Room on the Broom, The Snail and the Whale, and The Gruffalo. His illustrations have been published in more than 30 countries. He lives in London, England.
Loading...
or support indie stores by buying on