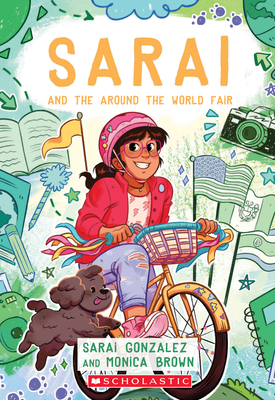 Sarai and the Around the World Fair

The fourth book in the Sarai Gonzalez illustrated chapter book series inspired by the life of eleven-year-old viral video sensation and social activist Sarai Gonzalez.When Sarai outgrows her bike, she worries she'll never get to travel anywhere. But, when Martin Luther King Jr. Elementary hosts their first Around the World Fair, Sarai learns that with a little imagination, you can go anywhere you want!Inspired by the life of viral video sensation and social activist Sarai Gonzalez with the help of award-winning children's book author Monica Brown.

Eleven-year-old Sarai Gonzalez became an overnight sensation after appearing in Bomba Estero's "Soy Yo," a music video about embracing yourself and loving your flaws. The video garnered over 30 million views and the New York Times called Sarai a Latina icon. Sarai and the Meaning of Awesome was the first book in her new chapter book series inspired by her life. Sarai lives in New Jersey with her family.
Monica Brown is the award-winning author of super-awesome books for children, including the Lola Levine chapter book series, Marisol McDonald Doesn't Match/no combina, Frida Kahlo and Her Animalitos, and Waiting for the Biblioburro. She is a professor of English at Northern Arizona University, specializing in Latinx and African American Literature. She lives in Flagstaff, Arizona, with her husband and her dogs, Lola and Finn. Visit her at monicabrown.net.
Loading...
or support indie stores by buying on