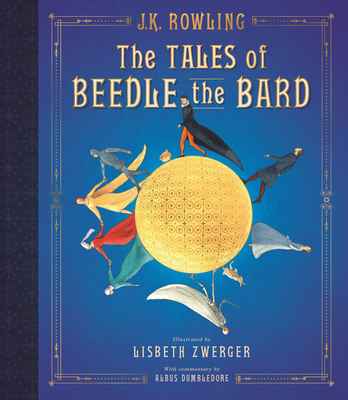 The Tales of Beedle the Bard

A brand-new fully illustrated edition of J.K. Rowling's classic tales from the wizarding world, with brilliant full-color artwork by award-winning artist Lisbeth Zwerger.The Tales of Beedle the Bard contains five richly imaginative stories of adventure, cunning, heartache, and, of course, magic. They are to the wizarding community what the tales of the Brothers Grimm are to Muggle families. This lush new illustrated edition has been translated from the ancient runes by Hermione Granger and is presented here with extensive commentary by Albus Dumbledore. And now Hans Christian Andersen Medalist Lisbeth Zwerger interprets these classic tales with beauty and tenderness (and wit), illuminating them for modern readers. With an introduction and notes by J.K. Rowling, this collection will thrill and delight Muggles and wizards alike.For every sale of this book, Scholastic will donate 15% of the suggested retail price to Lumos, an international nonprofit organization founded by J.K. Rowling that works globally to end the institutionalization of children. wearelumos.org