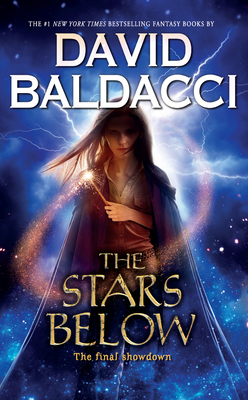 The Stars Below (Vega Jane, Book 4)

THIS. MEANS. WAR. The explosive conclusion to David Baldacci's instant #1 worldwide bestselling and award-winning fantasy series.
From the beginning, the fight was coming. Vega Jane fought her way out of the village where she was born, crossed a wilderness filled with vicious creatures, and raised a ragtag army behind her. But each triumph earned through grit and pain only brought her closer to him.

Necro. A sorcerer whose unspeakable evil is matched only by his magical power.

Vega and Necro are on a collision course. The clash between his awesome power and her iron will is going to shake the stars down. Their fight will seal their fates . . . and determine the future of their world.

The battle rages in The Stars Below, the furious conclusion to legendary storyteller David Baldacci's #1 global bestselling Vega Jane series.

Praise For The Stars Below (Vega Jane, Book 4)…

"The Finisher is an enchanting romp through a fantastical world worthy of Rowling or Brooks. Baldacci proves that his pen can engage youth as well as adults." -- Richard Paul Evans, #1 New York Times bestselling author of the Michael Vey series

"Vega Jane has stolen my heart. I've read several novels in the last few years with female protagonists and none of them are as amazing as Vega. . .Her adventures must be continued. To not do so would be a crime. This is the female protagonist I want my daughters to read and emulate." -- SciFi Pulse

* "What happens when an international best-selling crime novelist tries his hand at a youth fantasy? Well, in this case, success." -- Booklist, starred review

"Best known for his adult crime novels, Baldacci makes a detour into middle-grade with this wildly fanciful and darkly intriguing tale of a girl forced to fight for her life as she investigates the secrets of her tiny community." -- Publishers Weekly

David Baldacci is a global #1 bestselling author. His books are published in over 45 languages and in more than 80 countries; over 110 million copies are in print. His works have been adapted for both feature film and television. He is also the cofounder, along with his wife, of the Wish You Well Foundation, which supports literacy efforts across America. David and his family live in Virginia.
Loading...
or support indie stores by buying on