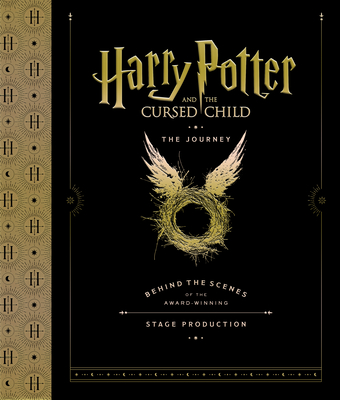 Harry Potter and the Cursed Child

The Journey: Behind the Scenes of the Award-Winning Stage Production

The official behind-the-scenes book of the record-breaking, award-winning play Harry Potter and the Cursed Child.Harry Potter and the Cursed Child is one of the most celebrated stage productions of the past decade. Opening in London's West End in 2016, on Broadway in 2018, in Melbourne in 2019 -- and with more productions worldwide still to come (including San Francisco later this year) -- the play has smashed records, collected countless rave reviews and awards, and captivated audiences night after night. Now readers are invited behind the scenes to experience the show's journey to the stage -- from the earliest phases of development with producers Sonia Friedman and Colin Callender, to the crafting of the eighth Harry Potter story with J.K. Rowling, director John Tiffany, and playwright Jack Thorne, to the gathering of an extraordinary team of artists and actors together to bring this new part of Harry Potter's story to life.With stunning photography, insightful interviews, and never-before-seen sketches, notes, candid backstage photos, and more, this full-color deluxe edition offers readers unparalleled access to this unique production, and is a beautiful gift for Harry Potter fans and theater lovers alike.

Jody Revenson has written extensively about the films of the Wizarding World, beginning with her contributions to the New York Times bestsellers Harry Potter: Film Wizardry and Harry Potter: Page to Screen. Jody wrote the Harry Potter Vault series, Harry Potter: A Pop-Up Guide to Hogwarts and Fantastic Beasts and Where to Find Them: Movie-Making News, among many other titles. She has also authored Looney Tunes comic books, MAD Magazine articles, Walt Disney theme park souvenir books and Power Rangers: The Ultimate Visual History. Not surprisingly, she’s a Ravenclaw. Jody lives in New York City.
Harry Potter Theatrical Productions Ltd was founded in 2013 to develop and produce the stage play Harry Potter and the Cursed Child, the original new story by J.K. Rowling, John Tiffany, and Jack Thorne. The team from Harry Potter Theatrical Productions Ltd has worked closely with Sonia Friedman Productions and Colin Callender’s Playground to produce the play, and also in expanding to new productions around the world.