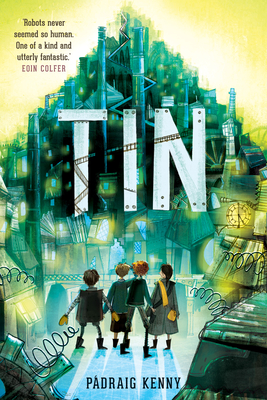 In this gripping, imaginative, and hilarious adventure -- comprised of an unforgettable crew of misfits -- a boy and his mechanical friends discover the truth about his past.
"Robots never seemed so human. One of a kind and utterly fantastic." -- Eoin Colfer
In an alternative England of the 1930s where the laws of mechanics govern even the most talented engineers, a mismatched group of mechanicals want nothing more than to feel human. Under the guardianship of the devious and unlicensed Gregory Absalom, an engineer who creates mechanical children, they have no choice but to help him in his unlawful practice. But through his unethical work, Absalom winds up creating a loyal and lively group of friends who will go to the ends of the Earth for one another.
When the story's protagonist, Christopher, discovers a devastating secret about himself and the friends are torn apart, it's up to his friends to find him. What they'll discover is the secret about the dark experiment that ended in disaster many years before...
Tin is an adventure story about friendship, courage, and loyalty, and what it means to be human.

Praise for Tin:
Padraig Kenny has written a science fiction story about...tragedy and heroics along with powerful emotions." -- School Library Connection
"Robots never seemed so human... utterly fantastic." -- Eoin Colfer, bestselling author of Artemis Fowl
"Full of empathy, anger, sorrow and love... a superlative debut." -- The Guardian (UK)
"A touching, eccentric story... Kenny is a thrilling writer who knows how to chill his reader." -- Telegraph
"A big-hearted debut about friendship, belonging and what it means to be human." -- The Bookseller

Pádraig Kenny is an Irish writer who hails from Newbridge in County Kildare. He is a graduate of Maynooth University where he obtained a master's degree in Anglo-Irish writing. He started his career writing radio drama. As an arts journalist he has contributed work to the iSunday Tribune/i, the iSunday Independent/i, the iIrish Examiner/i, and several other publications. iTin/i is his debut novel.
Loading...
or support indie stores by buying on