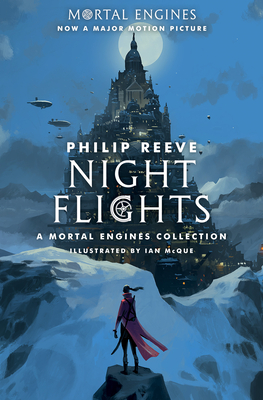 Go deeper into the world of Mortal Engines with these brand-new short stories set in the Mortal Engine world, just in time for the release of the epic film, produced by Peter Jackson!Return to the world of Mortal Engines in this new book of short stories about the rebellious young aviatrix, Anna Fang, illustrated by Ian McQue. A key character in the Mortal Engines book and upcoming film produced by Peter Jackson (December 2018), this is your chance to learn more of Anna's thrilling past. Night Flights includes Traction City, Philip Reeve's 2011 World Book Day Book. In a dangerous future world where gigantic, motorized cities attack and devour each other, London hunts where no other predator dares. But Anna Fang -- pilot, adventurer, spy -- isn't afraid. The three stories show gripping, moving, exciting moments in Anna Fang's life: her childhood as a slave aboard the moving city Arkangel, a showdown against a robotic Stalker that is terrifyingly out of control, and her free life as an intelligence agent for the Anti-Traction league ...

Philip Reeve is the bestselling author of the Mortal Engines quartet, which is now a major motion picture, and the award-winning Fever Crumb series. His other books include the highly acclaimed Here Lies Arthur and No Such Thing As Dragons. He lives in England with his wife and son. Visit him online at philip-reeve.com.
Loading...
or support indie stores by buying on