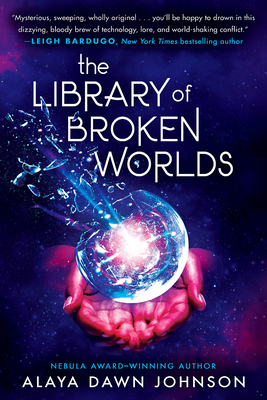 The Library of Broken Worlds

A girl matches wits with a war god in this kaleidoscopic, thought-provoking tale of oppression and the cost of peace, where stories hide within other stories, and narrative has the power to heal -- or to burn everything in its path -- from World Fantasy Award–winning author Alaya Dawn Johnson.

A girl and a god, alone in communion ...

In the winding underground tunnels of the Library, the great peacekeeper of the three systems, a heinous secret lies buried -- and Freida is the only one who can uncover it. As the daughter of a Library god, Freida has spent her whole life exploring the Library's ever-changing tunnels and communing with the gods. Her unparalleled access makes her unique -- and dangerous.

When Freida meets Joshua, a Tierran boy desperate to save his people, and Nergüi, a disciple from a persecuted religious minority, Freida is compelled to help them. But in order to do so, she will have to venture deeper into the Library than she has ever known. There she will discover the atrocities of the past, the truth of her origins, and the impossibility of her future.

With the world at the brink of war, Freida embarks on a journey to fulfill her destiny, one that pits her against an ancient war god. Her mission is straightforward: Destroy the god before he can rain hellfire upon thousands of innocent lives -- if he doesn't destroy her first.


Praise For The Library of Broken Worlds…

Praise for The Summer Prince:

* "Like leaping into cold water on a hot day, this original dystopian novel takes the breath away, refreshes, challenges, and leaves the reader shivering but yearning for another plunge." -- Booklist, starred review

* "With its complicated history, founding myth, and political structure, Palmares Tres is compelling, as is the triple bond between June, Enki, and Gil as they challenge their world's injustices." -- Publishers Weekly, starred review

* "An art project, a rebellion and a sacrifice make up this nuanced, original cyberpunk adventure... Luminous." -- Kirkus Reviews, starred review

Praise for Love Is the Drug:

“Equal parts character study and thriller, Love Is the Drug offers a gripping study of identity, sly social commentary, and a chilling glimpse of a dystopia that’s just around the corner.” —NPR

Alaya Dawn Johnson's first novel for young adults, The Summer Prince, received three starred reviews, was longlisted for the National Book Award, and was a Kirkus Best Book of the Year. She is also the author of Love Is the Drug. She grew up in Washington, DC, attended Columbia University, and now lives in New York City.
Loading...
or support indie stores by buying on