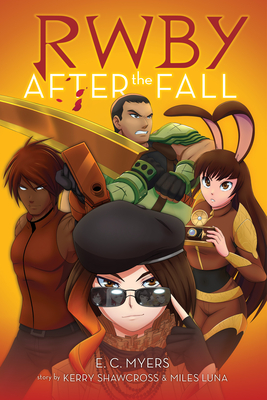 In the future-fantasy world of RWBY, Rooster Teeth's hit animated webseries, teens train to become warriors. Join the fight in this epic official, original novel from EC Myers and RWBY's head writers!Trouble is brewing . . .After Beacon Academy fell, Coco, Fox, Velvet, and Yatsuhashi made a vow: No one else is getting left behind. It's been more than a year since Team CFVY saw their school destroyed by the creatures of Grimm, their friends felled in battle or scattered across the world of Remnant. Since then, they've been settling into life at Shade Academy in Vacuo, fighting hard to finish their training so they can find their friends and save their world.When a distress message comes into Shade, asking for huntsmen and huntresses to defend refugees from a never-ending stream of Grimm, Team CFVY answers the call without hesitation. But in the heat of the desert, they're forced to relive their former battles, both from the fall of Beacon and from everything that came before.Don't miss this exclusive original story straight from award-winning author E.C. Myers and RWBY's head writers, Kerry Shawcross and Miles Luna!

E.C. Myers was assembled in the U.S. from Korean and German parts and raised by a single mother and the public library in Yonkers, New York. He is the author of numerous short stories and four young adult books: the Andre Norton Award–winning Fair Coin, Quantum Coin, The Silence of Six, and Against All Silence. E.C. currently lives with his wife, son, and three doofy pets in Pennsylvania. You can find traces of him all over the internet, but especially at ecmyers.net and on Twitter: @ecmyers.
Loading...
or support indie stores by buying on