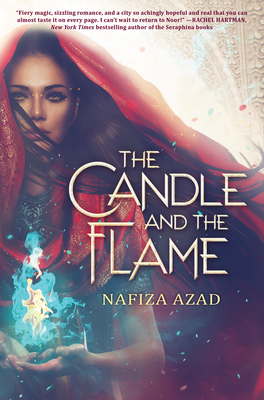 The Candle and the Flame

Azad's debut YA fantasy is set in a city along the Silk Road that is a refuge for those of all faiths, where a young woman is threatened by the war between two clans of powerful djinn.
Fatima lives in the city of Noor, a thriving stop along the Silk Road. There the music of myriad languages fills the air, and people of all faiths weave their lives together. However, the city bears scars of its recent past, when the chaotic tribe of Shayateen djinn slaughtered its entire population -- except for Fatima and two other humans. Now ruled by a new maharajah, Noor is protected from the Shayateen by the Ifrit, djinn of order and reason, and by their commander, Zulfikar.

In this William C. Morris YA Debut Award Finalist novel, Nafiza Azad weaves an immersive tale of magic and the importance of names; fiercely independent women; and, perhaps most importantly, the work for harmony within a city of a thousand cultures and cadences.

Finalist for the William C. Morris YA Debut Award

"No other book I've read this year has felt as much like home to me. Gorgeous, intricate and enthralling in its scope, The Candle and the Flame is a brilliant debut . . . a stunning standout in YA fantasy." -- Ausma Zehanat Khan, author of The Bloodprint

Nafiza Azad was born in Fiji and spent the first seventeen years of her life as a self-styled Pacific Islander. Now she identifies as an Indo-Fijian Muslim Canadian, which means she is often navigating multiple identities. Nafiza has a love for languages and currently speaks four. She holds a Master of Arts degree in Children's Literature from the University of British Columbia and co-runs The Book Wars (thebookwars.ca), a website dedicated to all things children's literature. Nafiza currently lives in British Columbia with her family.
Loading...
or support indie stores by buying on