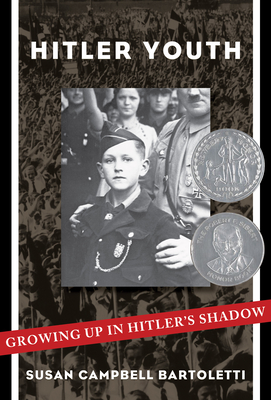 By the time Hitler became Chancellor of Germany in 1933, 3.5 million children belonged to the Hitler Youth. It would become the largest youth group in history. Susan Campbell Bartoletti explores how Hitler gained the loyalty, trust, and passion of so many of Germany's young people. Her research includes telling interviews with surviving Hitler Youth members.

"I begin with the young. We older ones are used up . . . But my magnificent youngsters! Look at these men and boys! What material! With them, I can create a new world." -- Adolf Hitler, Nuremberg 1933

Susan Campbell Bartoletti is the award-winning and critically acclaimed author of many fiction and nonfiction books for children. Her fiction includes the novels The Boy Who Dared, Dear America: A Coal Miner's Bride, and No Man's Land, as well as a number of picture books. She won the Newbery Honor for her nonfiction book Hitler Youth. A former eighth-grade teacher for 18 years, Bartoletti now writes full-time and lives in Pennsylvania with her family.

Awards and Distinctions for Hitler Youth:

* "Bartoletti offers a unique and riveting perspective on WWII by focusing on the young people who followed Hitler from 1933-1945." -- Publishers Weekly, starred review
* "Nonfiction writing at its best. Essential for WWII collections as well as teaching units on conformity, peer pressure and resistance." -- Kirkus Reviews, starred review
* "Bartoletti lets many of the subjects' words, emotions, and deeds speak for themselves, bringing them together clearly to tell this story unlike anyone else has." -- School Library Journal, starred review
* "This solid offering deserves wide readership by today's young people, and it is certain to promote extensive discussion." -- The Bulletin of the Center for Children's Books, starred review
* "Bartoletti draws on oral histories, diaries, letters, and her own extensive interviews with Holocaust survivors, Hitler Youth, resisters, and bystanders to tell the history from the viewpoints of people who were there." -- Booklist, starred review
* "The power of the account is matched by the many period candid and propaganda photographs, well-married to the text by strong captions and placement and an unobtrusive but period-evocative Art Deco page design." -- The Horn Book, starred review
or
Buy Here
Copyright © 2020 American Booksellers Association