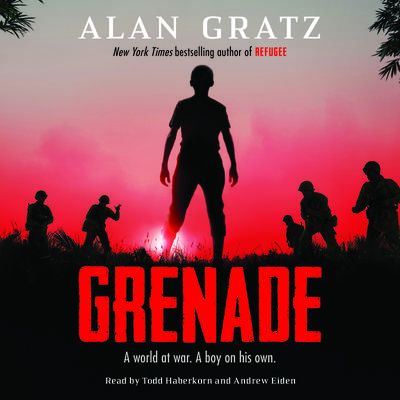 Here it is! The hugely anticipated follow-up to Gratz's NYT bestselling, critically acclaimed phenomenon REFUGEE. This is another searing and heart-pounding look at kids making their way through war.

It's 1944 and the world is at war. Hideki lives peacefully with his family on the island of Okinawa, near Japan. Until the day WWII reaches their door.

Hideki is drafted into the "Blood and Iron Imperial Corps" to fight for the Japanese army. He is handed two grenades and a set of instructions: go off into the jungle, and don't come back until you've killed an American soldier.

Meanwhile, young American soldier Ray Majors has just landed on the beach in Okinawa. He doesn't know what to expect, or if he'll make it out alive, but he knows he must keep moving forward.

From opposite sides of the war, Hideki and Ray each fight their way through horrors and dangers. But when the two of them encounter each other in the middle of the battle, the choices they make in that single moment will change everything.

From the NYT bestselling author of Refugee, a searing, action-packed look at how our courage and our conscience can redeem us in the darkest of times.