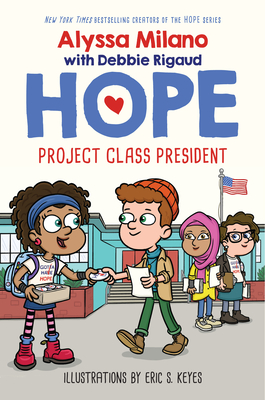 Hope Roberts for President -- or not? In the third book in Alyssa Milano's funny and relatable middle-grade series, Hope is running for sixth grade class president, with her friend and campaign manager, Grace, by her side. But in her effort to win over her classmates, Hope makes some promises she can't keep. Can Hope make things right with the students of JFK Middle -- and maybe still win the election, too? Hope's relatability, kindness, empathy, and can-do attitude will inspire a generation of do-gooders. This series is a response to the very palpable feeling that not only can young people save the world -- they will!This story will tie in perfectly to the 2020 presidential election and include Hope's tips about voting and elections in the back of the book!

Praise for Project Middle School (Alyssa Milano's Hope #1):A New York Times bestseller!"Hope is a likable and inspiring kid who never gives up." -- Kirkus Reviews"Animator Keyes's simple cartoons underline moments of social awkwardness and triumph throughout the novel, which delivers a worthy... message about teamwork [and] friendship." -- Publishers Weekly

Praise for Project Middle School (Alyssa Milano's Hope #1):A New York Times bestseller!"Hope is a likable and inspiring kid who never gives up." -- Kirkus Reviews"Animator Keyes's simple cartoons underline moments of social awkwardness and triumph throughout the novel, which delivers a worthy... message about teamwork [and] friendship." -- Publishers Weekly

Actress and activist Alyssa Milano has spent almost her entire life in the public eye. A famous child actor, she has continued to work throughout her adulthood in both television and film, most notably starring in the wildly popular television series Who's the Boss? and Charmed. Alyssa is also a lifelong activist and is passionate about fighting for human rights around the world. In 2003, UNICEF invited Alyssa to become a National Ambassador in recognition of her charitable work on behalf of children. Ever since then, Alyssa has been a champion of children's rights, working closely with UNICEF to raise money and awareness and provide aid to the children who need it most all over the world. Alyssa also speaks to kids in schools around the country about the importance of voting and teaches them how to fill out a ballot because she believes it's never too early to be civic-minded. Most recently, Alyssa is known for popularizing the #MeToo hashtag on Twitter, sparking the massive viral movement. She was named one of the 2017 Persons of the Year in Time magazine alongside other prestigious activists. She lives in Los Angeles with her husband and two kids.
Debbie Rigaud is the coauthor of Alyssa Milano's Hope series and the author of Truly Madly Royally. She grew up in East Orange, New Jersey, and started her career writing for entertainment and teen magazines. She now lives with her husband and children in Columbus, Ohio. Find out more at debbierigaud.com.
Eric S. Keyes is currently an animator and character designer on The Simpsons, joining the show in its first season. He has worked on many other shows throughout the years, including King of the Hill, The Critic, and Futurama. He was also a designer and art director on Disney's Recess. Hope is his first time illustrating a children's book series. Eric lives in Los Angeles with his wife and son.