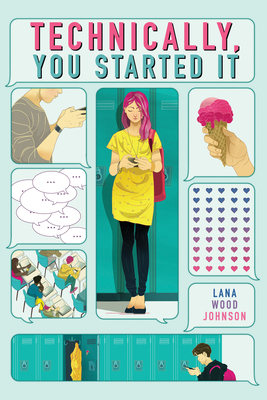 Technically, You Started It

A hilarious, snarky, and utterly addicting #ownvoices debut that explores friendship, sexual orientation, mental health, and falling in love (even if things might be falling apart around you).
When a guy named Martin Nathaniel Munroe II texts you, it should be obvious who you're talking to. Except there's two of them (it's a long story), and Haley thinks she's talking to the one she doesn't hate.

A question about a class project rapidly evolves into an all-consuming conversation. Haley finds that Martin is actually willing to listen to her weird facts and unusual obsessions, and Martin feels like Haley is the first person to really see who he is. Haley and Martin might be too awkward to hang out in real life, but over text, they're becoming addicted to each other.

Praise For Technically, You Started It…

Praise for Technically, You Started It

"Poignant and hilarious, nerdy and joyful, Technically, You Started It reminds us that true connection transcends any medium, evenin-especially in-the digital age." -Adib Khorram, author of Darius the Great Is Not Okay

"Inventive.... The all-text format could be a gimmick in less talented hands, but here the dialogue sparkles as it lets readers inside these teens' heads. It's a surprisingly powerful way to illustrate the true value of connection." -The Austin American-Statesman

"Told entirely through texts between the two main characters, Johnson takes a risk with her unconventional format-and it more than pays off." -The Columbus Dispatch

Lana Wood Johnson is the author of Technically, You Started It. She was born and raised in Iowa in the time before the internet but has spent the rest of her life making up for that. After years working in wireless communication for companies of all sizes, she now works doing the same for a local youth shelter. Lana lives in Minnesota with her husband and their English bulldog.
Loading...
or support indie stores by buying on