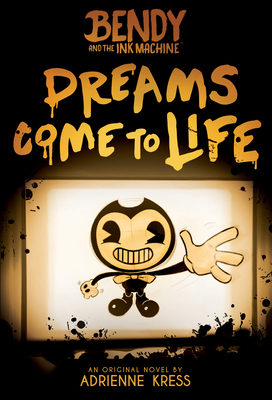 An all-new official, original novel from the twisted world of the hit horror video game, Bendy and the Ink Machine!Seventeen-year-old Buddy has spent most of his life trying to escape the Lower East Side slums of New York City. Working as a delivery boy to support his family, Buddy wants to become an artist, a dream he's sure will never be realized. But that all changes when a delivery job puts him face-to-face with Mister Joey Drew, the eccentric owner of an animation studio.Mister Drew takes Buddy under his wing as an apprentice, thrusting him into a world unlike anything Buddy has ever seen before. There's the colorful cast of the studio, from the cranky, yet driven composer Sammy Lawrence to Dot, the writing intern and Buddy's counterpart. Working for Mister Drew, Buddy starts to think that maybe it's really as simple as Mister Drew says: Dreams do come true. But not everything at the studio is as picture-perfect as it seems . . .Something is going bump in the night at Joey Drew Studios, something that leaves behind trails of thick, dark ink. While the studio frantically works toward their latest deadline, Buddy and Dot team up to find out just what is tormenting the studio after-hours, even if it means tracking the trail to Mister Drew himself.Don't miss this official, original, pulse-pounding story from award-winning author Adrienne Kress, developed with theMeatly, Mike Mood, and Bookpast!

Praise for Dreams Come to Life:"This well-written, diverse horror novel will primarily appeal to fans of the Bendy and the InkMachine video game franchise." -- Booklist

Praise for Dreams Come to Life:"This well-written, diverse horror novel will primarily appeal to fans of the Bendy and the InkMachine video game franchise." -- Booklist

Adrienne Kress is a Toronto-born actor and writer. Her books include the award-winning and internationally published novels Alex and the Ironic Gentleman, Timothy and the Dragon’s Gate, and Hatter Madigan: Ghost in the H.A.T.B.O.X. (with bestselling author Frank Beddor), as well as the steampunk novel The Friday Society and the gothic Outcast. She is also the author of the quirky three-book series The Explorers. Adrienne's first foray into writing horror came with her work on the Bendy and the Ink Machine novels, but as an actor she has had the pleasure of being creepy in such horror films as Devil's Mile and Wolves. And she took great pleasure in getting to haunt teenagers in SyFy's Neverknock. Find her at AdrienneKress.com and on Twitter/Instagram @AdrienneKress.
Loading...
or support indie stores by buying on