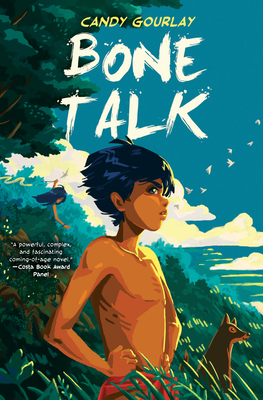 Shortlisted for the Carnegie Medal (UK)
Shortlisted for the Costa Prize (UK)
Sunday Times Children's Book of the Week
The Guardian Book of the Month
The Times Books of the Year
"Hotly Anticipated Historical Fiction for Young Adults" Amazon.co.uk
It is 1899. Ten year old Samkad thinks he knows everything about the world. He knows that home is in the mountains. He knows who his friends and his enemies are. And he knows that he will grow up to become a warrior like his dad, with his own shield, spear and axe.

His best friend is Little Luki and she too wants to become a warrior - though there's little chance of that because she is just a girl.

Then strangers arrive: a boy with many languages in his throat ... and weird-looking men called Americans who bring war and death.

Set during the U.S. invasion of the Philippines.

Endorsed by Amnesty International: "Amnesty International endorses Bone Talk because it upholds many human rights, including our rights to life, to equality, to have a religion, to enjoy our own culture. It also shows us what can happen when these are taken away from us."

Candy Gourlay was born in the Philippines, grew up under a dictatorship and met her husband during a revolution. Growing up, she wondered why books only featured pink-skinned children who lived in worlds that didn’t resemble her tropical home in Manila. It took her years to learn that Filipino stories too, belong in the pages of books. Her novel Bone Talk was recently shortlisted for the Carnegie Medal and the Costa Prize – it is set in the moment when headhunting tribes in the Philippines come face to face with American invaders. Her picture book, Is It a Mermaid, lushly illustrated by Francesca Chessa, was nominated for the Kate Greenaway Medal. Her novels have also been listed for the Waterstones, the Blue Peter and the Guardian Children’s Book Prize. She lives in London with her family, where she wages war on the snails in her garden.

Praise for Bone Talk in the UK

"One of the standout titles of the year." -- Clare Zinkin, The Independent

"Gourlay's evocative writing grips from the outset." -- Imogen Russell Williams, The Guardian "Books of the Month"

"This is a book that takes the reader on a memorable journey and stays in the mind for a long time." Citation, Carnegie Medal Shortlist

"Opens our minds to a little-known corner of history through Samkad's authentic, transfixing voice. Very special." -- Alex O'Connell, The Times "Books of the Year"

"A soulful coming of age story rich in Filipino myth and tradition, combined with a thrilling adventure of headhunters and invaders, asking powerful questions about community, colonialism and what it means to be a man." The Bookseller "Ones to Watch"

"A mesmerising world of soulful ritual and community, rendering the impact of the American invasion all the more devastating." -- The Observer

"Exciting and action-packed, it's well written and difficult to put down. My fave character is Kinyo (Samkad's brother) because he bravely stands up against his enemies and can speak two languages." -- Edward (10 years old), National Geographic Kids Featured Book
or support indie stores by buying on
Copyright © 2020 American Booksellers Association