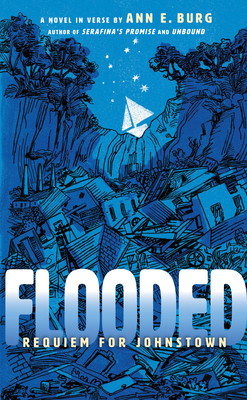 "Chillingly effective." -- Bulletin of the Center for Children's Books

Johnstown, Pennsylvania, in 1889 was a lively, working-class factory city. Above the soot-soaked streets, an elite fishing and hunting club, built on a pristine man-made lake, drew America's wealthiest business barons. Though repeatedly urged to fix the deteriorating dam that held the lake, the club members disregarded the warnings. And when heavy rains came, the dam collapsed and plunged the city into chaos.

On that fateful day, six children found themselves caught in the wreckage.

The chorus of their voices--all inspired by real people--create a gripping portrait of loss and healing. Plumbing themes of class, injustice, deprivation, and the environment, Ann E. Burg summons her prodigious heart and virtuosic poetry to turn one of the deadliest tragedies in our country's history into a transcendent and hopeful work of art.


Praise For Flooded: Requiem for Johnstown…

Praise for Flooded: Requiem for Johnstown:

* "Stunning, significant and sorrowful, Ann E. Burg's requiem melts history into prose. Brimming with sensory imagery and cadence that breathe life back into the 1889 disaster, this novel in verse serenades readers with multiple, yet personal voices of youth depicting daily life in Johnstown before and after the historic flood. Readers will quickly become connected to real life characters, empathetically curious of their fate. Through significant research and written testimony, Burg provides insight to the aftermath and unearths South Fork Dam's faulty structure and the liability of its prestigious Fishing and Hunting Club. The novel's artistry makes use of faded text to give voice after death to main characters as well as anonymous victims. Budding historians will be intrigued with new perspectives on prominent figures such as Clara Barton, Andrew Carnegie and Henry Clay. Highly recommended as a tragically engaging, poetic account of the 1889 disaster, which will leave an impression upon its readers." -- School Library Journal, starred review

"Burg ably conducts players and readers through a suite of emotions, from the slightly ruffled normalcy of family and school concerns, through the terror of the flood, and onto the frustration and outrage of working-class plaintiffs bringing well-heeled defendants to court. Burg uses identities of actual Johnstowners and, in a chillingly effective literary play, switches the names of deceased characters to their morgue tag numbers and grays out the font as they continue to speak after death... This is a worthy companion to similarly voiced novels." -- Bulletin of the Center for Children's Books

Awards and Praise for All the Broken Pieces:

ALA Best Books for Young Adults

ALA Popular Paperback for Young Adults

* "[A] stirring debut novel... will make readers want to rush to the end and then return to the beginning again to make connections between past, present, friends and enemies." -- Booklist, starred review

* "Using spare free verse, first-time novelist Burg beautifully evokes the emotions of a Vietnamese adoptee as he struggles to come to terms with his past." -- Publishers Weekly, starred review

"The story is a lovely, moving one." -- School Library Journal

Awards and Praise for Serafina's Promise:

Kirkus Best Book of the Year

ALA Notable Trade Book in the Field of Social Studies

"The grace of the Haitian people is revealed in Burg's poetic language, the vastness of Haiti's needs apparent in the details of Serafina's world. Serafina's journey is one readers will find unsettling but, at the same time, rich with examples of true courage and dignity." -- Karen Hesse, author of the Newbery Medal winner Out of the Dust and Safekeeping

"Serafina is certainly a resilient and admirable character who will touch the hearts of many... Through this story, Ann extends the reputation she established with All the Broken Pieces." -- Don Gallo

"A fascinating poetic tale, a magic window that opens gently and brings to your heart the cultural richness and wonders of a fate-taunting nation." -- Denize Lauture

Awards and Praise for Unbound:

NYPL Best Books of the Year

* "Strong readers will appreciate the rhythmic flow of the poetry and the well-executed pacing... An ideal selection for classrooms and libraries... across a wide grade range." -- School Library Journal, starred review

Ann Burg's debut novel, All the Broken Pieces, was named an ALA Best Book for Young Adults, a Jefferson Cup award winner and an IRA Notable Book for a Global Society, among its many honors. Her follow-up, Serafina's Promise, was named an ALA Notable, a Parents' Choice Gold Award Winner, and an NAACP Image Award finalist. Her latest novel, Unbound, was the winner of the New-York Historical Society Children's History Book Prize and the Christopher Award, among other distinctions. Burg worked as an English teacher for ten years before becoming a full-time writer. She lives in Rhinebeck, New York, with her family. Visit her online at annburg.com.
Loading...
or support indie stores by buying on